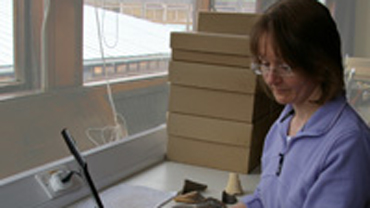 Liz is a Finds Officer at ULAS. She received a first in Archaeology BSc, and Landscape Studies MA from Leicester, and is a member of the Study Group for Roman Pottery and the Ceramic Petrology Group. She joined ULAS in 2004 as a pottery specialist on the large Roman pottery assemblages from the Highcross and Sanvey Gate urban excavations in Leicester. She has since reported on Late Iron Age and Roman pottery assemblages from urban and rural East Midlands sites, both for ULAS and external clients, recently including significant assemblages from Lockington (Leicestershire) and Mawsley (Northants). Her research interests include the transition from the late pre-Roman Iron Age to the Early Roman period.

Liz has a keen interest in community archaeology and engaging young people with the subject. She has participated in various outreach activities over the years, including working with the Leicestershire Branch of the Young Archaeologists’ Club, being Branch Leader 2007-2009.