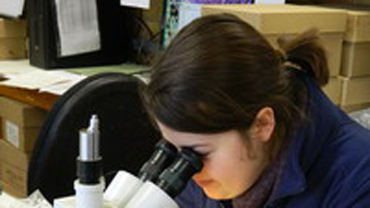 Rachel received her Bsc in Archaeology and MA in Bioarchaeology from the University of Leicester, and is a member of the archaeobotany working group. Rachel joined ULAS in 2013, initially assisting with finds and environmental processing, before taking on the role of Environmental Officer, co-ordinating sampling and processing strategies for sites as well as producing specialist reports on plant remains. Rachel has been heavily involved in recent excavations including those at Kilsby, Northamptonshire and the Field School excavation at Bradgate Park, Leicestershire.

Rachel is interested in medieval and post-medieval consumption behaviours. She is undertaking a part-time PhD with the University of Leicester, funded by Midlands Three Cities, which considers the extent to which humoral theory (a medical ideology) influenced consumption behaviour in early modern England. Her case study is the diet of the Grey family who lived at Bradgate Park in Leicester, and she is taking a multi-disciplinary approach analysing animal bones and plant remains from recent excavations and historical documents.