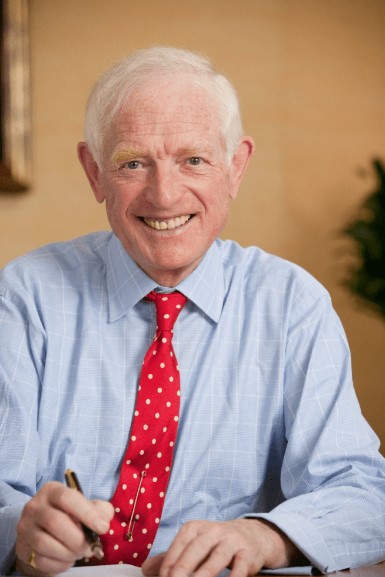 The University has learned, with regret, of the death of local businessman Sir David Samworth, Honorary Graduate and generous donor.

Born in Birmingham, David Samworth was educated at Uppingham School in Rutland. He was a fourth-generation member of a local family which originally specialised in the pork trade. He inherited the business from his father in 1955 and ran it with his brothers Frank and John until his retirement. Through diversification and the acquisition of new businesses and brands, the Samworth Brothers company went on to employ over 7,000 people in the Midlands and Cornwall, producing sandwiches, pasties and meat products for the major supermarkets and other retail outlets.

Sir David stepped down as Samworth Brothers CEO in 1999 and relinquished his role as chairman in 2005, becoming a life president of the business.

Sir David’s interest in developing the skills of his workforce led to his support for the City Academies which the government of the time was promoting. Through the Samworth Foundation he supported many charitable organisations. He was a long-standing supporter of Uppingham School, serving as Vice-Chairman of its Governing Body from 1980 to 1989 and as Chairman from 1996 to 1999. He was High Sheriff of Leicestershire in 1997. He was awarded the CBE in 1985 and was knighted in 2009, for services to charity.

On the basis of all the above, the University awarded Sir David an Honorary Doctorate of Law in 2012. (View on YouTube.)

Sir David began his philanthropic relationship with the University in 2011 when the Samworth Foundation donated £20,032 to support a PhD focused on ‘The Impact of Food on Learning’. This study examined the social and behavioural aspects of dining in children aged three to sixteen and the effect it has on their school attendance and attitudes to learning.

His values underpinned by his strong Christian faith, Sir David had a long association with Leicester Cathedral. He served as the President of the Honorary Canons and supported the Cathedral in its fundraising to make Leicester the final resting place of King Richard III.

In 2013 David generously donated a million pounds towards the construction of a new Centre for Medicine (now the George Davies Centre). If you have ever wondered why the largest lecture theatre in the building is called the Chetwode Lecture Theatre, that is an acknowledgement of Sir David’s contribution (Chetwode is a recurring middle name in the Samworth family). Sir David joined George Davies, Sir David Attenborough and Michael Attenborough at the official opening of the Centre in November 2017. Good relations between the University and the Foundation have continued since then.

Sir David is survived by his wife Rosemary, four children and seven grandchildren.