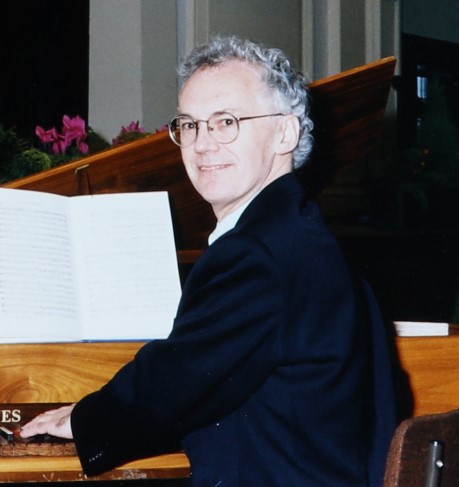 We have learned, with sadness, of the death of Anthony Pither, the University’s last Director of Music.

After graduating from the University of Birmingham, Anthony’s career ran from Head of Music in a Nottingham grammar school in the 1960s to running a music department in a West Sussex college of education, to Music Organiser at Aston University in the 1970s and early 1980s. He had a breadth of experience in the fields of academic music, music education and concert promotion, before embracing a wide range of teaching and performance at Leicester.

He was appointed as Lecturer in Music at Leicester in 1984, when the University still had a School of Music. Music as an academic subject at Leicester came to an end in 1991, at which point Anthony became Director of Music, overseeing the various student music groups and managing the institution’s relationship with professional orchestra and ensembles.

He worked particularly closely with the acclaimed Lindsay String Quartet (who received a joint Honorary Degree from Leicester in 1998). Other groups to benefit from his expertise include the Archduke Piano Trio, Knighton Chamber Orchestra, Proteus Chamber Orchestra, the Helix Ensemble and the Coro Nostro choir.

Throughout his life, Anthony was a prolific composer and a busy conductor, his compositions including a piano concerto, a violin concerto, a horn concerto and a unique piece scored for two tubas and two trombones! He also organised significant local concerts, including memorial concerts for two former Vice-Chancellors, Charles Wilson and Fraser Noble.

For the many music groups run by students, Anthony’s philosophy was always to quietly encourage and facilitate their development and expansion. In the ensembles he personally directed he chose not to promote elitist groups but to involve as many students as possible – and amateur musicians outside the University.

Anthony Pither retired as Director of Music in September 2005, although he continued in a part-time role at Leicester for a further six months. On his retirement, the Helix Ensemble premiered a new work by him entitled Concentus which was inspired by the paternoster, the Music Department being situated on the 18th floor of the Attenborough Tower. In December 2005, a piece by Anthony was included in the ceremony to install Sir Peter Williams as the new Chancellor of the University.

“It’s probably the best job in the University,” was how Anthony described his role when he retired. “The hours are often long and unsocial, but the rewards are great. There is a sure sense of achievement in introducing students to some of the great works of western classical music, and in representing the University in the wider community.”

The funeral will take place at Yeovil Crematorium on Friday 16 December.  Family flowers only; donations to Help Musicians.