The University has learned, with sadness, of the death of Professor Alan Robson Buchan MD DPH FFPH, Emeritus Professor of Community Medicine, who passed away on New Year's Day. 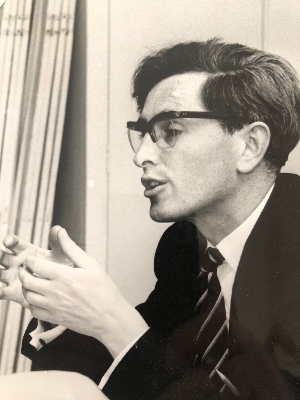 After his retirement from the Leicestershire Area Health Authority and the University of Leicester, and the untimely death of his wife Dorothy, Alan moved to Windermere in the Lake District, in 2000.

Alan grew up in Byker, Newcastle upon Tyne, was a medical student at what was then King’s College Durham and following qualification did house jobs at the Royal Victoria Infirmary in Newcastle. In the late 1950s he did his national service in West Germany as an RAMC captain working at the Medical Centre in Rinteln near Hanover, a frequent visitor to Berlin before the wall was erected in 1961. He returned to the Northeast and trained in Public Health with the then Medical Officer of Health for Newcastle, Dr Pearson, gaining his DPH before taking his first substantive post as a Medical Officer in South Shields.

He was the Medical Officer, when in June 1963 there was an outbreak of typhoid in South Shields. The cases were traced to shipments of corned beef from Argentina. The discovery was that water, polluted by raw sewage, from the river Parano was being used to cool the tins in the Rosario canning factory. While there were outbreaks in South Shields and also Harlow and Bedford in 1963, this was not effectively communicated to the public health services and it was not until a further outbreak occurred in Aberdeen in 1964 that the Government accepted the cause and corrective measures were belatedly taken. Alan wrote up his experiences for his MD thesis, and after a period as Deputy Medical Officer for Somerset he was appointed as the Medical Officer of Health for Leicestershire in 1967.

Initially, he worked at Greyfriars, in the city offices of the County Council – unknowingly parking his car over the remains of Richard III on a daily basis – but subsequently moving out to Glenfield, when the new County Hall and Glenfield Hospital were opened. After the 1974 reorganisation of the NHS he became the Area Medical Officer for a newly combined authority of Leicester, Leicestershire and Rutland. He was principally responsible for bringing all the different hospitals in Leicester and Leicestershire, such as Groby Road, Glenfield, the Towers, the General and the Leicester Royal Infirmary, into one administration. This was extremely important, not only in creating an integrated healthcare system with strong links to primary care (led by Dr Gwilym Edmondson-Jones) but also in establishing close links with the University under the leadership of the then Vice-Chancellor Maurice Shock. It was this bringing the hospitals together and the interaction with the University that paved the way to the creation of the new Medical School, whose first students arrived in 1975. The first cohort, graduating in the summer of 1980, included Nilesh (now Sir Nilesh) Samani. In many ways, bringing a cohort of clinical foundation professors, such as Sir Peter Bell, John Swales, Sandy McNeish and Sydney Brandon, to Leicester raised the quality and scope of local specialty services and created a research base. In many respects, this move was the forerunner of what would  now be considered an Academic Health Science Centre. Alan worked very closely with the then Dean, Sir Robert Kilpatrick, and Mr Ken Wood, the Postgraduate Dean, in the rationalisation of services and training between the hospitals; ultimately the AHA (T) becoming the University Hospitals of Leicester (UHL). This allowed the University to influence the delivery of health care in Leicestershire in the 1980s and 1990s.

Alan served on the Standing Committee for the Minister of Health, and was quite opposed to the introduction of the 1990s purchaser–provider split, which he thought would lead to care by postcode lottery and because some practices would be 'purchaser' and some not, a two-tier NHS. 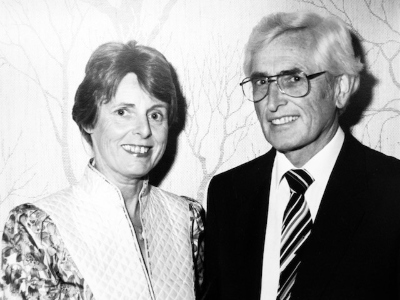 Alan and Dorothy were very much a part of the Leicester community and lived for more than thirty years on Glebe Road opposite the University’s Botanical Garden. They are survived by their three children: Alastair (now Professor of Stroke Medicine in Oxford), Fiona (now a retired Headmistress in Leicestershire) and Andrew (now in business in Nottinghamshire) and their five grandchildren, of whom three continue Alan's legacy in medicine, infectious disease and public health. Dorothy became the Head of Portland House School, subsequently changing its name to Leicester High School for Girls in 1982. After her retirement in 1992 she joined the School of Archaeological Studies (now the School of Archaeology and Ancient History) as a mature student, where her mentors included Professor Graham Shipley (coincidentally, himself a native of Northumberland). Both Dorothy and Alan shared a keen interest in ancient history, which included many fulfilling summers exploring archaeological sites on the Peloponnese in Greece.  They shared the discovery of an ancient theatre near Upper Aigeira now being excavated by Austrian archaeologists. Their love of Greece extended to strong bonds with Greek families and an ongoing interest in all aspects of Greek culture. After Dorothy’s untimely death, Alan keenly supported the creation of the annual Dorothy Buchan Memorial Lecture in Ancient History, endowed by generous donations from Alan and Dorothy’s family and friends, which also support a dissertation prize and travel bursaries.

It is the hope of the family that the lectureship, now in its 22nd year, will expand to include a commemoration of Professor Alan Buchan, who died on the 1st of January 2022.

In a tribute to Professor Buchan, Professor Samani said: “Professor Buchan’s leadership and contribution to the development of health services in Leicestershire in the 1970s and 1980s was profound. He was also a key figure in establishing the Leicester Medical School in 1975, which has had major and enduring knock-on benefit for healthcare for the local community.”