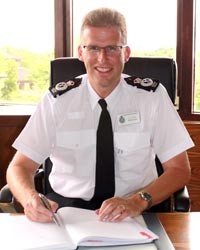 We have learned, with deep regret, of the recent passing of Simon Cole, just weeks after his retirement from the position of Chief Constable of Leicestershire Police. Simon was an Honorary Fellow in the School of Criminology and represented Leicestershire Police on the School’s External Advisory Board. He also sat on the Advisory Board of the Centre for Hate Studies.

Staff and students benefited enormously from the close relationship that Simon facilitated between the University and Leicestershire Police. His expertise helped the School of Criminology shape its strategic plans in both teaching and research, and he often contributed talks to students on policing issues and careers and facilitated visits to Police Headquarters where students could learn more about the various aspects of policing in the city and county.

Over the course of his 12 years as Chief Constable, Simon visited the University numerous times for public talks and events. In March 2020 he spoke about the impact of DNA fingerprinting on modern policing at the University’s DNA35 event. His last visit to campus was in January this year when he was a guest at the Graduation Ceremony where David Baker was awarded an Honorary Degree.

Details of Simon Cole's life and career can be found on the Leicestershire Police website.

“I met Simon shortly after I started at Leicester and got to know him well.  He soon became a trusted friend and advisor and he was a close colleague of many at the University, particularly at the Centre for Hate Studies in our School of Criminology where he was a Visiting Fellow.

“Simon was an individual of rare distinction whose many qualities shone in a life devoted to public service.  Few could fail to be inspired by him through his commitment to inclusiveness and excellence in his professional standards. He was charming, kind, always helpful and positive – people of his calibre are few and far between and we are all the richer for knowing him and poorer for our loss.

“Colleagues who worked with him and students who learnt under him have benefitted greatly from his wealth of knowledge and experience and he leaves a rich legacy not only in the way he shaped the constabulary and policing in Leicestershire, but through the qualities he brought to the profession and to education.

“I and colleagues at the University of Leicester express our profound sadness at his passing and offer our deepest condolences to his family and friends.”

“Staff and students in the School of Criminology are deeply saddened by the news of Simon’s death, and we offer our deepest condolences to his family, friends, and colleagues. We are so fortunate as a School to have such a close relationship with Leicestershire Police, and in particular we are so grateful for Simon’s support of our teaching and research over the years. As an Honorary Fellow in Criminology and member of our School Advisory Board, Simon gave so much of his precious time to helping us ensure that our research and teaching always has a positive impact on current and future issues in policing.

“I know that every opportunity our students had to interact with Simon left them with a deep respect for his experience and leadership in policing, and inspired many of them to pursue careers in policing locally and nationally. I am so grateful to Simon for his support over the years, and I know that my colleagues in Criminology have many fond memories of working with Simon on a range of policing initiatives. His kindness, professionalism, and collaborative spirit will not be forgotten, and his commitment to policing and the community is a legacy that will live on for us all.”

Professor Neil Chakraborti, Director of the Centre for Hate Studies:

“Simon will be fondly remembered for his immense contribution to our local communities and the wider policing family. His leadership was grounded in compassion, dialogue and evidence based decision making, and he has left a remarkable legacy that we all have much to be thankful for. He was a close friend to the School of Criminology and the Centre for Hate Studies, and a huge supporter of our research endeavours over the years. Simon was incredibly generous with his time, frequently going the extra mile to support our staff and students on an individual basis despite the many demands on his diary. We are deeply saddened by his loss and our heart goes out to his family, friends and colleagues at this difficult moment.”

“Professionally, our role, as an Ethics Committee, was to ask searching questions about the policing of Leicester, Leicestershire and Rutland, and we frequently did. But it was always apparent to us that the Senior Leadership Team were committed to doing all that they could to maintain a professional service that worked for all members of the community. Right from the start, it was made clear that they expected vigorous challenge and that it was welcome; they recognised that without challenge and transparency, they could not improve. This openness to scrutiny clearly came from the top of the organisation; this could be seen in many ways, from Simon’s frequent personal engagement with a range of community groups to his dedicated (and he once jokingly accepted colleagues’ suggestions that it was somewhat addictive) use of Twitter as a direct means of engaging with the public.

“The Senior Leadership team were also acutely aware of their responsibilities in policing the diverse community of Leicester, Leicestershire and Rutland. They fully accepted their duties were to all members of the community; they wanted to serve the whole community and were clear in desire to achieve a more representative police force. Again, I am certain this came right from the top of the organisation.  Similarly, they understood their responsibilities to all of their workforce, understanding the strains that policing in a modern age places upon ‘their people’; and they did see their employees as more than just employees, but as part of their community. Policing is a difficult balance of a range of duties and responsibilities; under Simon’s leadership, the force was prepared to engage with difficult questions and do the best they could. I have no doubt that professionally, Simon leaves a strong legacy of dedication to professional policing on behalf of all the communities of Leicester, Leicestershire and Rutland.

“Personally, I remember Simon as being incredibly affable and approachable. He wore his responsibilities lightly. He was a man who was easy to like and respect and his leadership style, to an outsider like me, seemed to be one based on taking people with him, rather than directing others what to do. His loss must be heart-breaking for his family. My thoughts are with them.”

Staff, alumni and anyone else with memories of Simon Cole are invited to sign the online book of condolences below.