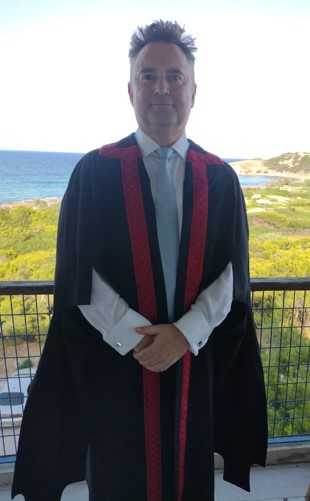 We have learned, with great regret, of the sudden and unexpected death of Dr Simon Leader at the age of 53. Born in London, Simon was an academic dedicated to the study of media and communication who learnt much of his craft as a teacher and researcher at Leicester during the 1990s before taking up a teaching post at the American College of Greece in Athens in 2003.

After completing his BA in Humanities at Nottingham Trent University, in 1991 Simon joined the MA Mass Communications programme at the Centre for Mass Communication Research (since absorbed into the School of Media, Communication and Sociology but widely known simply as ‘the Centre’), then offering one of the very few postgraduate programmes in the field in the UK. A devotee of popular culture with an impressive knowledge of popular music and film, Simon brought his background in the humanities to bear on the sociologically inflected version of media studies that was the Centre’s hallmark at the time, establishing himself as a promising scholar in the burgeoning field of media studies.

After completing his MA in 1992 Simon joined the staff of the Centre as a Teaching Assistant to support the newly-launched BSc in Communication and Society. He rapidly revealed his aptitude as a teacher and took on a large teaching load with great enthusiasm. During this time he also became the Centre’s news archivist and took on additional roles in student support.

In 1995 Simon was appointed as a Research Associate to work on a project on television and food consumption among Leicester families. He enjoyed the interactions with our research participants, developed his skills as an interviewer and content analyst, and co-authored several papers reporting on our findings. At the project’s conclusion Simon became the recipient of the 1999 Stanley Burton scholarship, completing his PhD in 2004 at the Stanley Burton Centre for Holocaust and Genocide Studies with a thesis entitled 'The Holocaust and the British Regional Press 1939-1945'.

It was during this period that Simon met Margarita, then a PhD student at the Centre. They moved to Athens together a few months before getting married in 2003, when Simon also joined the American College of Greece (aka Deree College) to teach on their communication programme. More than a simple career move, this was a new life in a new country that was to become his home until his untimely death. Alongside his new role at ACG, Simon also continued for many years as a tutor on the Centre's media and communication distance learning programmes, delighting in the diversity of the student body and the contrast with his campus-based undergraduate teaching at ACG.

Simon was an immensely popular teacher with a likeable, generous and sociable nature that seemed to suit his subject matter. His great charm and sense of wonder at the absurdities of the world around him made him great fun to be with. During his time at Leicester he forged deep friendships with staff as well as students that have lasted to this day, and on moving to Greece he proved very adept at maintaining social connections, frequently updating his globally dispersed social circle with family news and tales of new experiences. He also possessed an enviable ability to remain positive even when pressed, as he was on occasion, by difficult personal circumstances.

He will be remembered fondly by those who knew him at Leicester not just for his constructive and enthusiastic contributions to the academic life of the Centre but also for his open and gregarious manner, good-humoured company and optimistic outlook on life.

Dr Simon Gerard Leader (24 January 1969 – 23 July 2022). He is survived by his wife Margarita Kondopoulou, sons Stefanos and Petros, his father Stephen, and his brother Andrew.