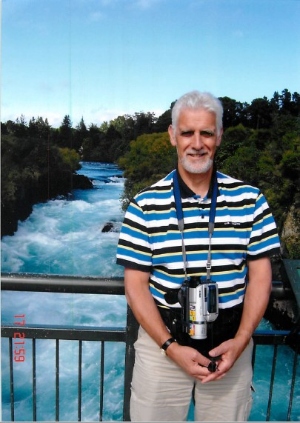 We have learned, with sadness, of the death of Mr Jim Mackley. Jim joined the Department of Genetics as a technician in 1964, and was then Chief Technician in the Department of Biochemistry from 1981 until his retirement. As Sir Alec Jeffreys notes below, Jim was instrumental in the development of DNA fingerprinting.

Jim died on 3 February 2022 at LOROS Hospice after a long fought battle with Amyloidosis and Multiple Myeloma. He received a stem cell transplant from his identical twin brother in 2006 and for  ten years the condition seemed to be reasonably under control. He was monitored regularly at the Amyloidosis Research Centre based within the Royal Free Hospital in London.

After 10 or 12 years, Jim’s condition began to necessitate various forms of chemotherapy in the hope they might help him. Sadly, in the end there was nothing left to try.

Jim and I were married for 32 years. He had two daughters, Sarah and Isabel, and I had a son, Oliver. Jim’s family meant everything to him. He loved spending as much time as possible with the three children and being a grandfather of eight was an absolute joy to him.

Jim’s faith was very important to him, and he worshipped at St Andrew’s Church, Countesthorpe, for about 23 years. He was a regular member of the Worship Group where he played tenor and alto sax. Jim loved to sing as well, not only in church but also when he was a member of the KRR Operatic Society. He appeared in many productions and thoroughly enjoyed his time with the Society.

When St Andrew’s Church decided to begin building some new church buildings next to the church, Jim was asked if he would oversee all building works, liaising with architects, builders, council officials etc., and he did this willingly. The finished building is called The Bridge and is now used very day not only by the church but also by various community groups.

Anyone who knew Jim well knew he was a Leicester Tigers fan, and he was a season ticket holder for many years. He also enjoyed Formula One motor racing and watched every qualifying round as well as the race itself. I think it would be fair to say he actually enjoyed most sports so having a dedicated sports channel on the television proved to be invaluable, especially once he became less mobile.

Jim was the sort of person who could turn his hand to anything: plumbing, decorating, gardening, car repairs, anything at all – and he enjoyed doing so.

One of the best holidays Jim and I had was when we went to New Zealand to visit his sister. It was a trip of a lifetime and we enjoyed every minute touring around the North Island. We made so many happy memories and we would often talk about the things we’d done and the wonderful places we visited. This photograph is one I took of Jim in New Zealand – so very happy, so relaxed and the best husband ever. We were truly blessed to have been able to have this amazing holiday whilst he was well, as only a few months after our return he was diagnosed.

Taking early retirement enabled Jim to do things he’d always wanted to do whilst he was fit and well, and I will always be forever thankful for this time together.

I was very sorry to hear about the death of Jim Mackley. Jim was a Departmental Technician in the Genetics Department when I first arrived in Leicester as a (temporary) lecturer in 1977. The Head of Department, Professor Bob Pritchard, asked if I could take on Jim half-time to help me start my very early research into variation in human DNA and to teach him some of the new DNA technologies I'd acquired and developed during my preceding postdoc in Amsterdam so that Jim could then help others in the Department with new approaches to DNA analysis.

I can't remember how long Jim and I worked together (maybe half a year?) but the collaboration really helped me, especially in getting my new lab up and running and in developing a standard panel of human DNA samples from volunteers in the Department, including myself and Jim, that proved crucial in  detecting the very first examples of DNA variation.

Some years later, in 1984 when we'd first developed DNA fingerprinting, Jim again proved incredibly helpful; he had an identical twin brother, allowing us for the first time to show that identical twins really do share (virtually) identical DNA.