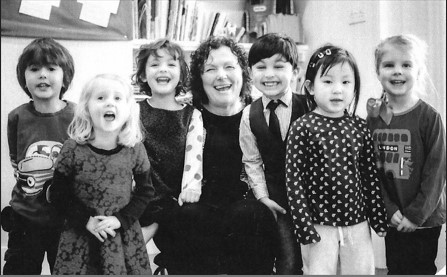 The University has learned with sadness of the death of Philippa Lambden, former manager of Stanhope House Day Nursery. This facility on Regent Road was once owned by the University and was used by many staff.

When past parents and colleagues talk about Stanhope House Day Nursery they always think of Philippa, her smile and how she always found time to chat with everyone. It is therefore with great sadness that we have to inform you that Philippa sadly lost her short battle with cancer and passed away on 25th July at LOROS hospice, her family beside her throughout.

Philippa started at Stanhope in 1979 in the University-owned building on Regent Road, where it is still located today, running the nursery alongside the Students' Union and a committee of parents; in 1982 she was appointed Matron. The nursery continued to operate in this manner until 2004 when the committee made the decision to step down and Philippa became the owner of the business.

Philippa retired at the end of 2017 and slowly handed over the reins when Ruth Reynolds became the owner. Despite being retired, she was still a big part of the nursery, turning up for our events and popping by for a catch up and a cuddle with the children.

Philippa was an inspirational woman who created a nursery for children to thrive in and placed the children at the heart of it all. She supported parents and families, allowing them reassurance and comfort in the knowledge that their children were being well looked after while they went out to work.

Messages from past parents

"Philippa was an absolute life saver at such a difficult time for me and our family. She was the only reason I was able to carry on working and achieve what I was able to in my career."

"My time at Stanhope bears the fondest of memories and I would say it was one of the happiest times in my life. It gave me a great foundation to deal with many troubles I’ve faced since leaving. Philippa’s firm but fair attitude has influenced the way I have raised my children; with no nonsense, a deep regard for manners and total involvement with them as people. Their view matters, just as mine did to her."

"I have no doubt that my children’s careers have their roots in the early years learning at the heart of Stanhope House Day Nursery that Philippa implemented with such care and professionalism. Quite simply, they both loved being at nursery. And as parents, we felt that it was THE best place they could be when they couldn’t be at home with us."

"Philippa always had time to spend chatting, and was incredibly supportive to us mums and dads, not just there for the children. She was brilliant at reminding us of our priorities, to slow down (there were lots of us running in and out; we needed to be calmed down!)."

"I had conversations with people (the list is endless) who all say that without Philippa they would not have had the amazing careers that they have had. From potty-training (!) to weaning and primary school conversations, they all talk about how Stanhope made life as a new working mother easy and took away so much of the stress. More than that, the friendships (between children and between parents) and the Stanhope network are unbelievably strong. The ties created are unbreakable!."

Philippa also created a joyful place of work for her colleagues and staff, educating and teaching them by passing on her own knowledge to enable them to succeed in their own careers.

"Philippa became my mentor and good friend, through good times and bad we supported each other. Over time I came to realise that every decision she made was for the right reason and today I still use her philosophy and ethics in the way I run the nursery – Philippa has left such an amazing legacy and has very hard shoes to fill, but I think and hope I make her proud." – Ruth (Director)

"The nursery that Philippa built over the years not only provided a happy place for children to thrive in, but it also became a joyful place to work, where she allowed and supported staff to learn and grow themselves, offering us a listening ear and a shoulder to cry on in difficult times and being there to celebrate the good. I truly believe that Stanhope is ‘one of a kind’ and continues to be, due to Philippa’s hard work and influence over the years." – Sherri (Manager)

In 2015 Philippa was nominated and awarded for being an ‘Inspirational Woman’ at the University in recognition for the work she did to support working parents.

It is down to Philippa's dedication, hard work and influence over the years that Stanhope has become the nursery that it is today. The impact and legacy that she created will continue to be a part of the Stanhope life for many years to come and we will forever be grateful of that. Friendships and the Stanhope network are unbelievably strong even today.

Thank you to everyone for your understanding during this difficult time.

The nursery has set up a JustGiving page to say thank you to LOROS for the charitable work they do in providing palliative care, with all proceeds going to LOROS Hospice in Philippa's memory.