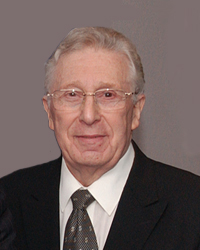 We have learned, with regret, of the death of Dr Frank May MBE, a former member of the University Court and Council and a generous benefactor for many years.

Educated at Gateway School in Leicester, Frank Ephraim May left there in 1944 to go into the Army, where he specialised in Communications. His role in the Forces took him through Italy and to Piraeus, Athens and finally to Patras in Greece, a port on the Peloponnese Gulf, 45 miles from Corinth.

In Patras he was seconded to the British Military Attachée. His varied duties during his 18-month posting included being a military observer during the 1946 Greek elections and teaching English to Greek Students. His was subsequently posted to Germany where he spent four days working with Field Marshal Montgomery shortly before the latter’s retirement.

Frank was demobbed in January 1948 and shortly afterwards met his future wife Katherine at a party. They were wed in 1950 and had three sons, David, Alan and Michael.

He had nursed an ambition to go to RADA once he left the army, but his father was ill with disseminated sclerosis, and circumstances dictated that Frank was needed to run the family electronics and radio business on Churchgate, Leicester. However, this did not last long as Frank was called on by the Home Office to become a Signals Training Officer for the Civil Defence Corps. In 1952 he became the Senior Signal Officer Controller for the whole of Leicester, charged with liaison with Army commanders, the police and fire services in the event of an emergency.

When the Civil Defence was disbanded in 1968, Frank was contacted by the Chief Constable of the time, Sir Robert Mark, and asked to convert two former Civil Defence vehicles into a control centre that could be used as mobile incident rooms. Frank worked with the Police for three years before joining the Parole Board, and for six years, from 1974-80, interviewed prisoners who wanted parole and compiled statements with them. Shortly after this, he first became involved with the University of Leicester.

In 1983 he became a Trustee, then subsequently Chairman and Honorary President of the University and Hospital-based charity Medisearch. He also served as Chairman of MAARA, the Midlands Asthma and Allergy Research Association and was a Patron of the Bardi Orchestra.

Frank May has actively supported many parts of the University in countless ways, including the Richard Attenborough Centre, the Stanley Burton Centre and the Department of History of Art and Film. His ‘May Fund’, set up in 1982, has furnished Degree Day Prizes in History, Archaeology, Engineering, Computer Science, Physics, Law and Biochemistry.

Frank May was awarded and MBE in 1994 and in 2001 was granted the Freedom of the City of Leicester. The University awarded him an Honorary Doctorate of Laws in 1992 and named him a Distinguished Honorary Fellow (our highest award) in 2005. That same year, the lecture theatre in the Henry Wellcome Building was named The Frank and Katherine May Lecture Theatre. 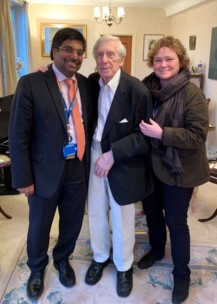 “Dr Frank May was a larger-than-life figure who made an inestimable contribution to the University and impacted upon the lives of many individuals over four decades.

“His name, and that of his wife Katherine, is woven into the fabric of this University with a lecture theatre named after them and prizes endowed in his memory. Dr May brought town and gown together on campus, he supported research particularly in the field of medicine and he gave generously of his time and resources to diverse areas of the university, including the Attenborough Arts centre and our holocaust centre.

“We are deeply saddened to lose a friend and stalwart upon whom this University had bestowed its highest honour. His legacy lives on through the lives he transformed and his name lives on in the University he loved.”