One problem faced by the team was, how best to preserve the grave for posterity. Under normal circumstances, the best protection is to carefully cover the archaeology with a protective membrane and rebury it. However, it was intended that Richard III’s grave would remain uncovered; indeed, today it is preserved beneath a glass floor in the visitor centre for all to see.

A nice Roman mosaic or a bit of ruined wall is relatively easy to consolidate but something like a grave, which is essentially a hole dug in the ground is more problematic to maintain, for its structure comprises poorly combined soil which can easily erode away.

During the excavation in 2012, archaeologists made detailed drawings of the grave which will leave a lasting record of it for future generations to study; but researchers at the University of Leicester could go one step further, combining cutting edge laser scanning with digital photogrammetric techniques to create a highly detailed 3D reconstruction.

A terrestrial laser scanner was used to map the exact shape of the grave. This is part of the Leicester LiDAR Research Unit, based in the Department of Geology. The instrument was placed at various points around the grave. Using the principles of LiDAR (Light Detection and Ranging), it fired out laser pulses in a 360 degree arc, recording the length of time taken to bounce off a surface and return to the scanner.

The information gathered at each of the measuring positions was combined to build up a 20-million point-cloud of the site – revealing everything down to the precise soil textures of the excavated grave walls.

The data from the laser-scanning of the grave was then combined with a survey made using digital photographs. More than 80 pictures of the grave were taken from many different angles and 3D modelling software was used to combine the photos into a 3D model of the grave.

This research was carried out by David Ackerley, Department of Geology, and José Manuel Valderrama Zafra, School of Archaeology and Ancient History. 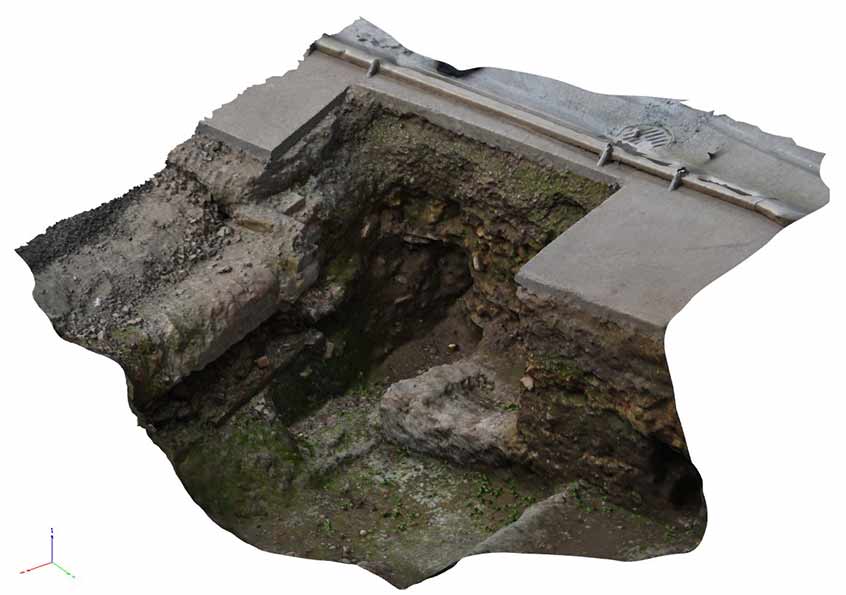 A 3D model of the grave

Our specialists analysed the skeleton to determine the age and sex of the individual, identify the spinal abnormalities and characterise the wounds.