The 2011 desk-based assessment identified three potential areas of excavation – the Leicester City Council Social Services car park, the former Alderman Newton’s School playground and a private car park to the west of New Street. Limited funds for the excavation, however, meant that the trenches needed to be carefully located to maximise the chances of finding any evidence of the friary.

The Grey Friars area shortly before the dig, looking north-east across the Social Services car park.

The starting point was really to look at other friary plans, to try and predict the positions of the principal buildings.  However, whilst there were generally standard layouts for such sites – usually with the west/east orientated church to the north of the cloisters – plans were often adapted to suit the space available.  So the church, for example, could sometimes be on the south side, as it is at Leicester’s Augustinian friary near West Bridge. 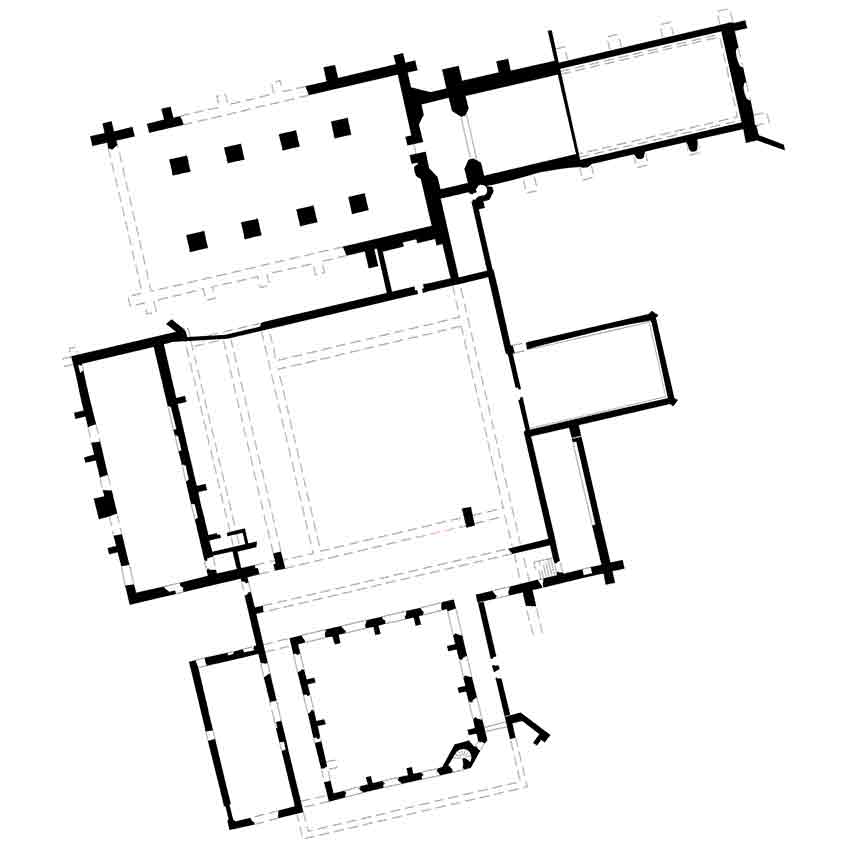 Plan of the Franciscan friary at Walsingham in Norfolk, a fairly standard friary layout.

On the basis of a typical arrangement with church either to the north or indeed to the south, Richard Buckley, the lead archaeologist, thought that two trenches aligned north/south on the eastern side of the precinct, down the middle of the Social Services car park, would be the best strategy to pick up some of the many east/west walls.  If this proved successful, a third reserve trench would then be dug to help clarify the building plans or even potentially target the choir in the (rather unlikely) event that the church was found.

In August 2011, Philippa Langley commissioned a Ground Penetrating Radar survey of the three areas. This revealed modern utilities such as electrical cables, water pipes and sewers, together with several ambiguous features, but unfortunately no clear building plans emerged. It was thought that a layer of demolition rubble underneath the asphalt was probably masking any archaeological features. In view of this, there seemed no reason to change the proposed trench locations.

Fieldwork was initially set to be done over Easter 2012, subject to funding and ongoing negotiations between Philippa and various television companies. Ultimately, it took longer than this to get the project off the ground and the work was put back to August and September 2012. 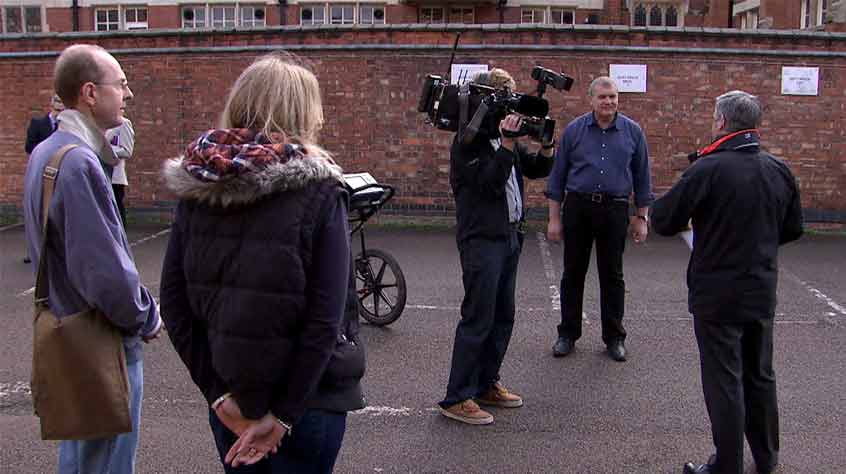 Lead archaeologist Richard Buckley explains the project to the media, watched by Michael Ibsen (a distant relative of Richard III) and Philippa Langley.

On Friday 24 August 2012, the Greyfriars Project was formally launched with a press conference and media opportunities, attended by Michael Ibsen, a direct descendant of Richard III’s sister, who had kindly agreed to provide DNA. Site director Mathew Morris and archaeologist Leon Hunt lay out the first two trenches and supervise the cutting of the car park surface with a road cutter.

To achieve all five goals was always going to be difficult. Because modern buildings and roads could not be dug up, the archaeologists could only excavate within an area covering approximately 17% of the identified friary precinct. With even further constraints of time and resources available to them, this meant that, in reality, they could only hope to excavate approximately 1% of the friary precinct.

With this in mind, it was thought Objective 1 was a reasonable expectation; 2 was a probability; 3 was a possibility; 4 was an outside chance; and 5 was not seriously considered possible.

Finding the remains of the Franciscan friary

Details on the beginnings - digging the trench in the car park.

Identifying clues to the position and orientation of the buildings

The archaeologists carefully removed dumps of building rubble left behind when the friary was demolished, exposing the medieval buildings beneath.