Knowing where to look

Whilst nothing of the friary remains above ground today, its site has never actually been lost, despite one early map of Leicester, the 1610 Speed map, getting its location wrong.

First, street names still provide clues to the friary’s location. In the south-east quarter of the ‘historic’ city centre are two roughly parallel streets. These once ran between the Saturday market and the medieval High Street (today Southgates). The northernmost was called St Francis’ Lane (today Peacock Lane), whilst the southernmost is still called Friar Lane. These names suggest that the Franciscan friary was in the vicinity. The Victorians named another street Grey Friars, which connects the two together, in honour of the friary which once stood nearby. 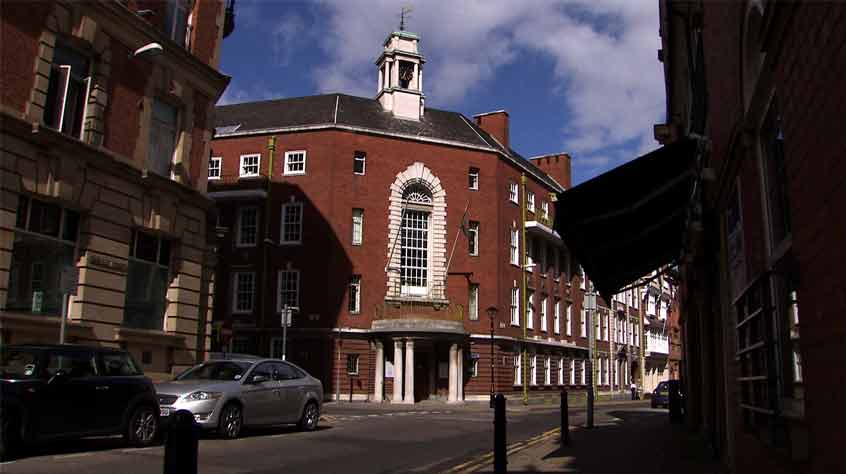 The junction of Friar Lane and Grey Friars, street names which provide important clues to the location of the Franciscan friary.

Antiquarian sources are also clear on the location of the friary. In 1538, John Leland recorded that ‘the Grey Freres of Leicester stode at the end of the hospital of Mr. Wigston’ whilst in 1791 John Throsby noted that ‘The Franciscan or Grey Friary, stood on the south side of St Martin’s church-yard’ and that ‘the grounds belonging to the Friary were spacious and extended from the upper end of the Market Place to the Friar Lane meeting house’. Leland may have visited Leicester whilst the friary was still occupied, or shortly after it was demolished; whilst Throsby was a noted local antiquary. Both broadly place the friary on land south of St Martin’s Cathedral.

Narrowing the search further owes much to the work of Charles Billson, whose research of ‘The King’s Fate’ in 1920 led him to conclude that ‘Richard’s remains must now lie, if undisturbed, somewhere beneath the Grey Friars Street or the buildings that face it’. David Baldwin, similarly researching ‘Richard III’s Grave in Leicester (PDF, 233kb)’ in 1986, narrowed this further to the north end of Grey Friars. The first person to suggest Richard’s grave may still be under a car park on New Street was the Keeper of Archaeology at Leicestershire Museums, David T.D. Clarke, writing in the Leicester Mercury in 1965 and in 1975 Audrey Strange suggested beneath the Social Services car park (PDF, 157kb).

However, there was still a lot of leeway as to the actual location of the friary’s principal buildings and its church in particular. This is not helped by the fact that the plans of urban friaries are notoriously unpredictable to work out because they were frequently adapted to fit limited or awkward spaces within existing townscapes.

Left to right: an extract from Thomas Roberts’ 1741 map of Leicester, showing the grounds of the ‘Gray Fryers’; a modern map of the same area; the two maps overlaid showing the ‘Gray Fryers’ (red) in relation to modern buildings and streets and three large open areas potentially available for excavation (blue).

In January 2011, Philippa Langley approached ULAS to produce a desk-based assessment of the Grey Friars area.  This examined the known archaeological, historical and cartographic records and concluded that the friary church was most likely sited west of the modern street known as Grey Friars.  Map regression analysis, particularly of Thomas Robert’s 1741 map of Leicester; the earliest surviving map to show accurate detail of the area and which clearly marks the ‘Gray Fryers’, was able to further outline a specific search area.  This showed that much of the most likely location was occupied by modern redevelopment (covering 83% of the site) but that the area still contained a number of open spaces which appeared to have remained largely undisturbed since the friary’s dissolution in the 16th century.

Greyfriars in old maps and plans

How we pinpointed the potential location of Grey Friars.

We identified three potential areas of excavation and got to work.