Walls B and G lined up, meaning that the human remains found on the first day (at A) lay inside the eastern half of the church, quite possibly in the choir – where Richard III was reputedly buried. For this reason, those remains would be among those exhumed when the license was granted. 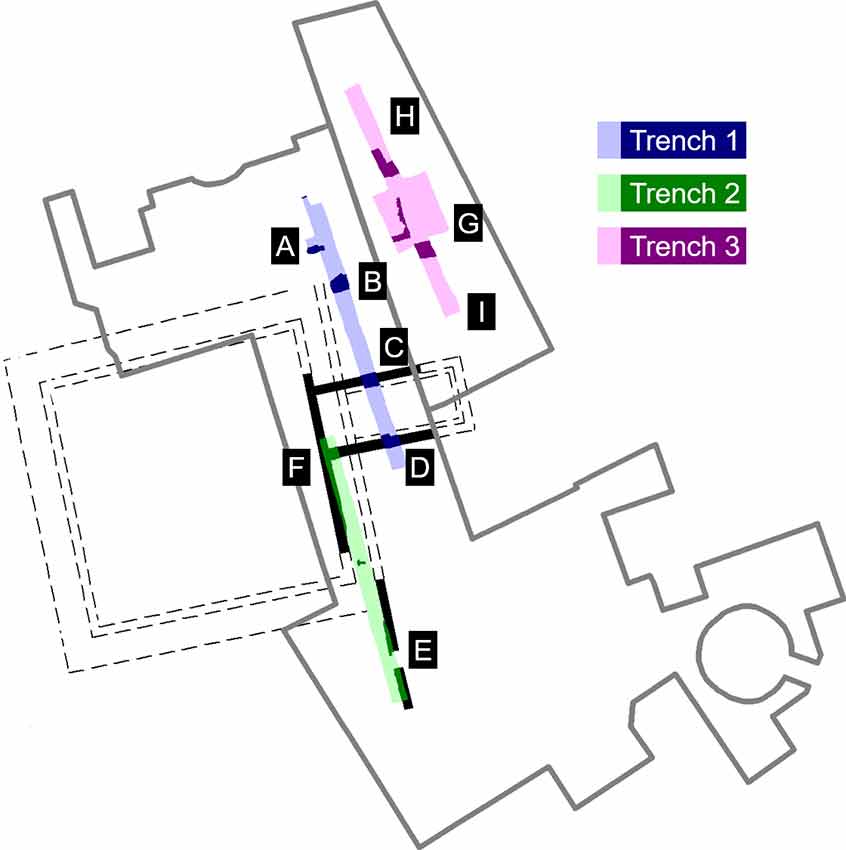 The archaeologists uncovered more of the medieval tile pavement in Trench 3. It appeared to have been made re-using medieval tiles from the friary and was perhaps a path in the garden of Robert Herrick’s mansion, which occupied the site after the friary was demolished. 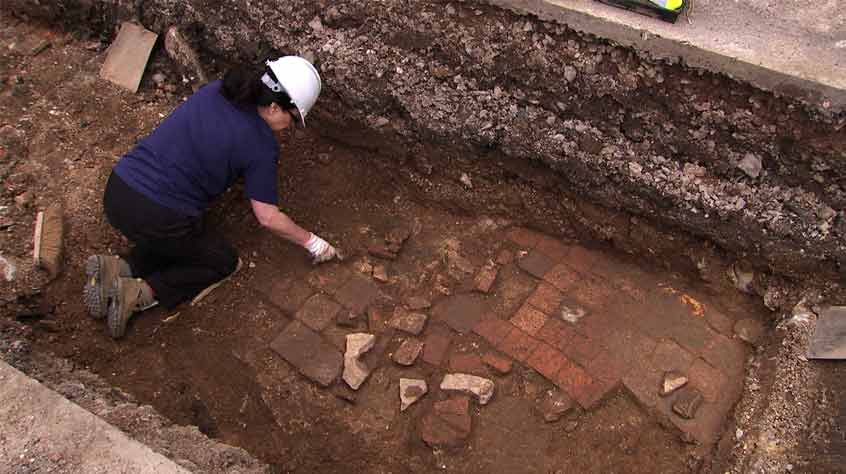 Kim Sidwell uncovers paving (I) that is made from re-used medieval floor tiles and might be part of a path in Robert Herrick’s garden.

The Ministry of Justice granted a licence for the removal of human remains.

A small area above the human remains in Trench 1 (A) was carefully widened with a digger to give archaeologists better access to the burial. Jo Appleby and Turi King began to carefully remove the grave soil by hand. Work was slow, to avoid damage to the skeleton and by mid-afternoon it was clear that the skeleton would not be exhumed before nightfall. Work was halted for the day. 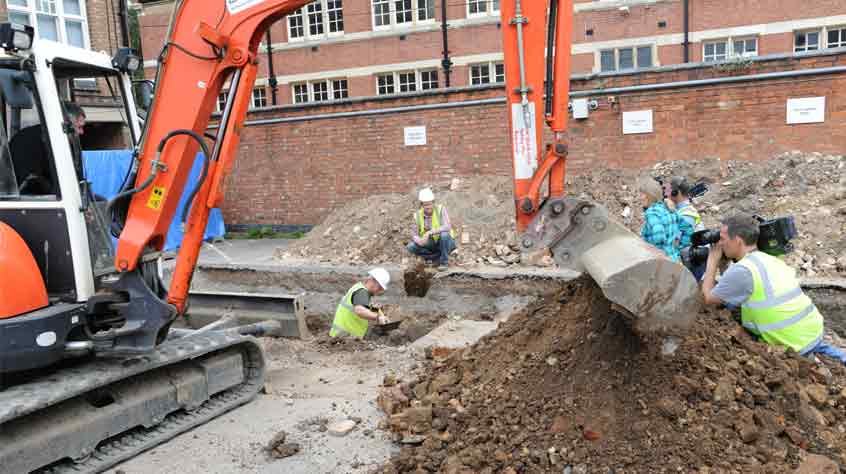 Meanwhile, archaeologists began to widen Trench 3 between walls G and H, hoping to uncover more of the church and determine whether the burial was indeed in the church’s choir. While removing the rubble in Trench 3, a small group of human bones was discovered, buried in a small pit. This was not a complete skeleton, but seemed to be the remains of a single person, probably a woman. A grave must have been disturbed by workmen when the church was demolished, and the displaced bones reinterred out of respect for the dead. 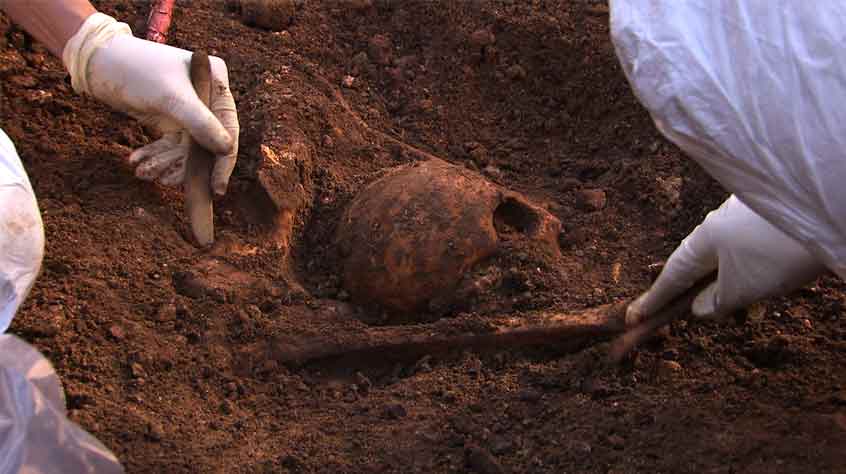 In the school playground, archaeologist Leon Hunt and colleagues continued to expand Trench 3 between the two robbed walls (G and H).

Over in the car park, Jo Appleby, assisted by site director Mathew Morris, began carefully to uncover the skeleton in Trench 1 (I), first revealing the legs and the pelvis. There was no sign of any feet. Jo wore a special suit to prevent DNA contamination of the remains. 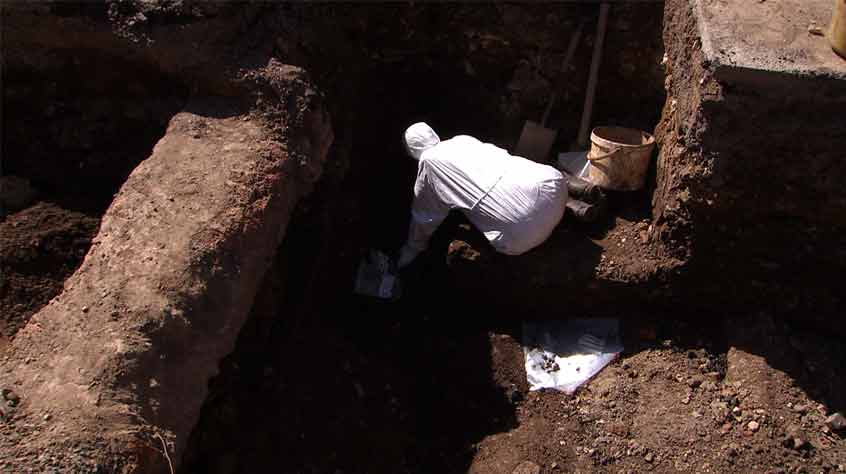 Back in the playground, two distinct spaces became evident in the church, represented by different patterns of floor tiling, still visible as impressions on the mortar bedding even though the tiles themselves no longer survived. There was a step up from the lower western floor to the higher eastern floor. Built into the lower floor was a narrow stone wall running parallel with the church’s southern wall – perhaps the base of a choir stall. This would make the lower floor part of the choir (and hence the higher floor part of the presbytery). 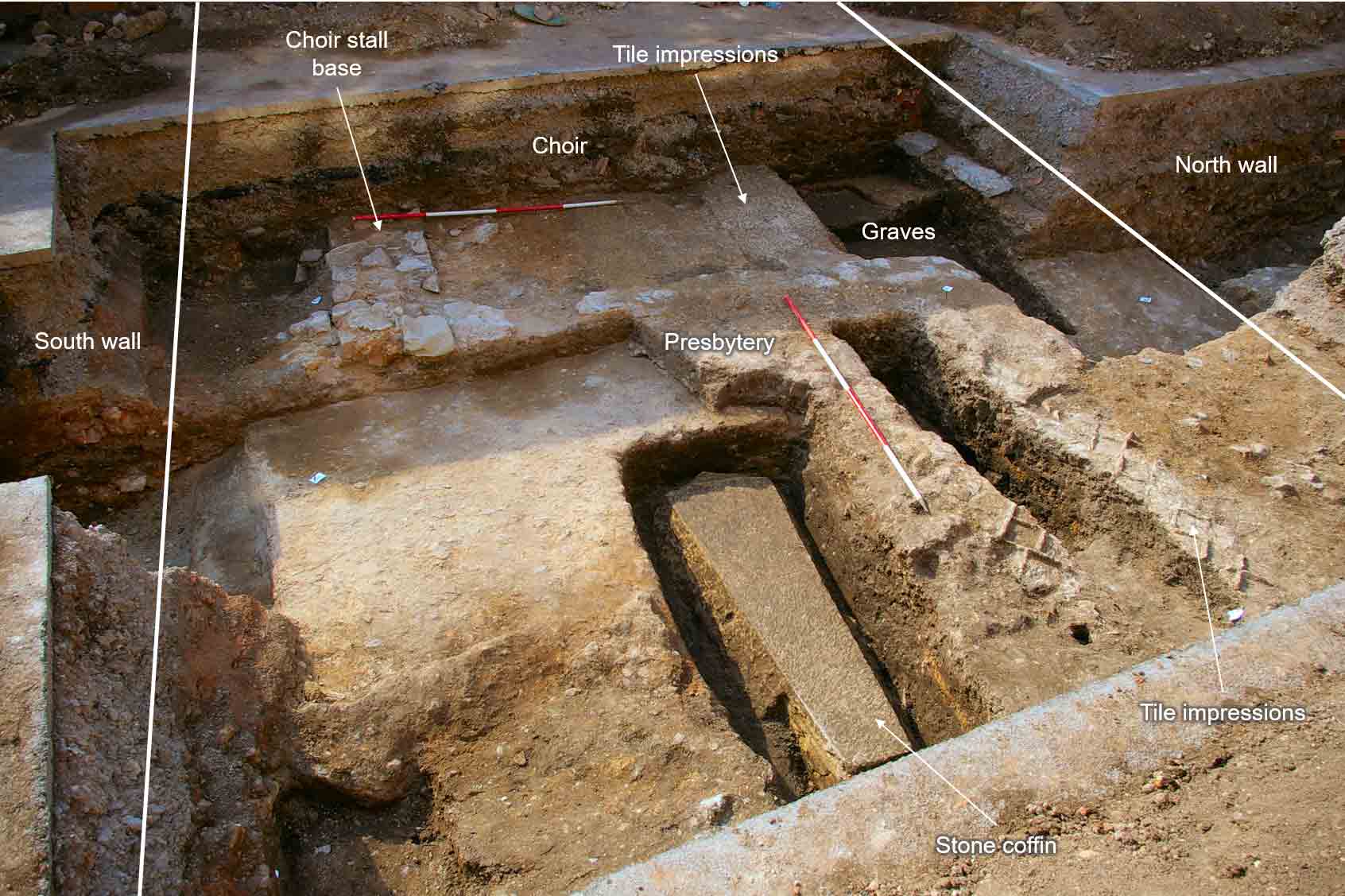 Trench 3 (G-H) fully excavated, looking west. A medieval stone coffin and tile impressions in the presbytery of the church can be seen in the foreground, with the remains of the choir stalls behind.

Objective 4 achieved: the choir located. Our next task was to locate the mortal remain of Richard III within the choir.

Find out more about the discovery of the grave and the important skeleton that resided.

Despite the ambiguous location, Richard III was found almost complete.