Locating the mortal remains of Richard III within the choir

While Leon Hunt and his colleagues uncovered the church floor underneath the playground, back in the car park, Jo Appleby and Mathew Morris found that the grave in Trench 1 was not a neat rectangle but a rough, lozenge-shaped hole with untidy, sloping sides. It looked like it was dug quickly without great care.

Jo was surprised to suddenly uncover the skull at a much higher level in the grave than the rest of the skeleton. The head was bent forward and to the left at an awkward angle in order to fit the body into a grave that was slightly too short. There were obvious wounds on the cranium. Jo and Mathew realised that, whatever else is found, this skeleton was going to be both interesting and important. 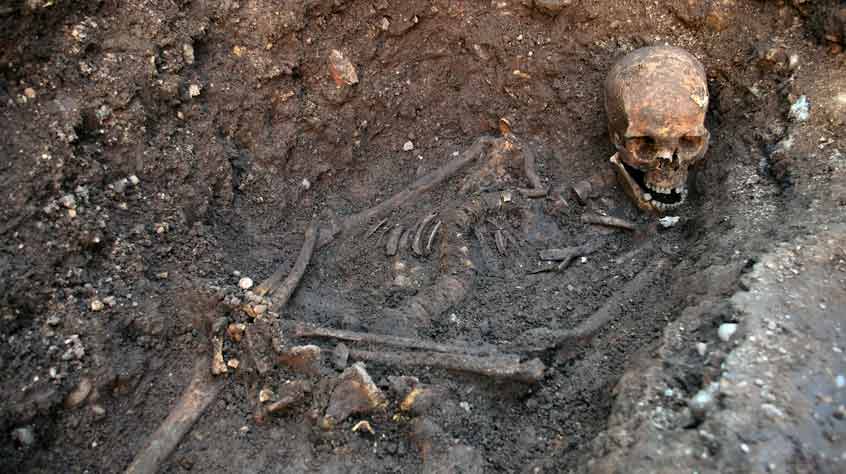 Richard III’s head was propped up awkwardly against the end of the grave because it had been dug too short for him. 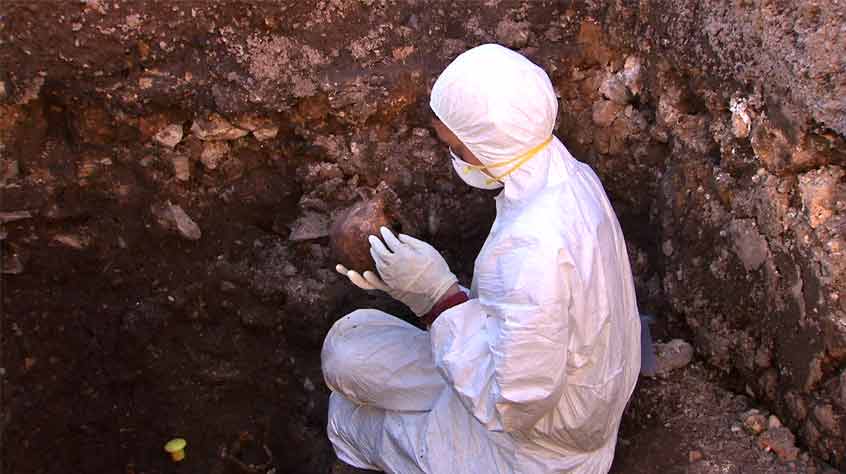 In the afternoon, project manager Richard Buckley arrived with Deirdre O'Sullivan (an expert on urban friaries from the University's School of Archaeology and Ancient History) and an external specialist, Dr Glyn Coppack, who confirmed the choir–presbytery theory. Richard realised that the skeleton on the other side of the wall – the first find on the very first day of the dig – was actually buried within the choir.

In the car park, Jo uncovered the arms and ribcage. The body had all the hallmarks of a hurried burial: there was no coffin, it had not been laid out carefully and the position of the bones suggested it probably wasn’t even wrapped in a shroud.

Clearing away the earth from around the rib cage, Jo uncovered the base of the spine. Working along it, she found a distinct bend to one side. As the rest of the spine was revealed, Jo and Mathew were somewhat shocked to see an unmistakable S-shape...

Load the video related to: The burial

Sometime later… long after everyone else had gone home, Jo and Mathew continued to carefully remove the skeleton, bagging and labelling each bone. The skull, lower jaw and right femur, which would be used for DNA sampling, were wrapped in baking foil to protect them from contamination. Finally, with the sun setting, everything was loaded into the van, the gates were locked, and the mortal remains of Richard III bid farewell to the church of the Grey Friars after 527 undisturbed years.

Over the following days, the grave in Trench 1 was fully excavated and the archaeology around it was thoroughly investigated. Church floors matching those in Trench 3 could be seen in the sides of the trench and the north wall of the church was found at the very northern end of Trench 1. These suggested that the burial took place in the south-west corner of the choir, with the grave positioned against the southern choir stall. 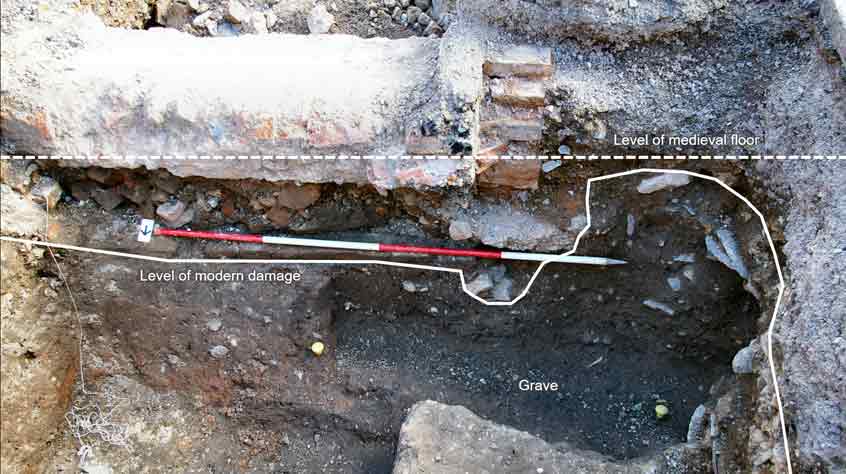 In Trench 3, the remains of four or five other tombs were uncovered in the eastern half of the church. These dated to a much earlier period of the friary’s history. For this reason – and because a ‘plausible candidate’ had already been found – these graves were not investigated further, but were left undisturbed. 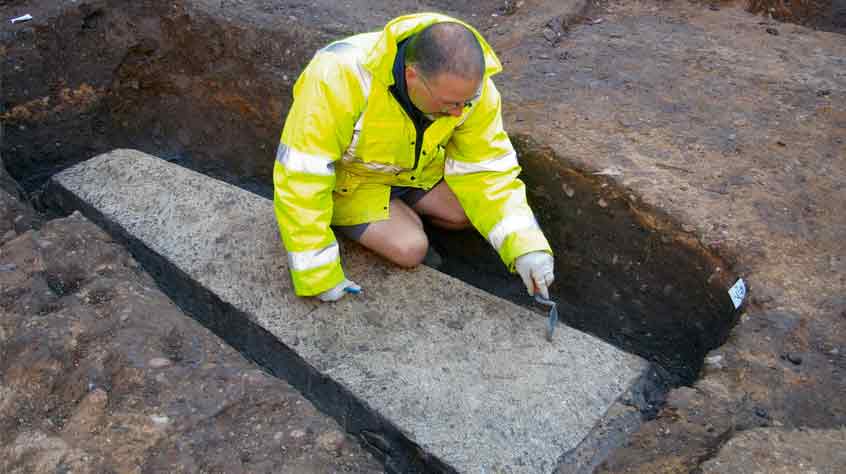 One of the graves contained a large trapezoidal stone coffin, of a type dating from the late 12th century to the mid-14th century; considering its position in the church, not far from the high altar, it almost certainly contained someone of importance, perhaps a patron or benefactor of the friary. Although the coffin was not opened, a gap at its foot, between the lid and the base, allowed a glimpse inside. The feet of an articulated skeleton were partially visible inside the remains of what appears to be a metal coffin lining, probably of lead.

The University of Leicester held an open day at the site. Nearly 2,000 people attended, eager to learn about the excavation. Queues extend around the block. 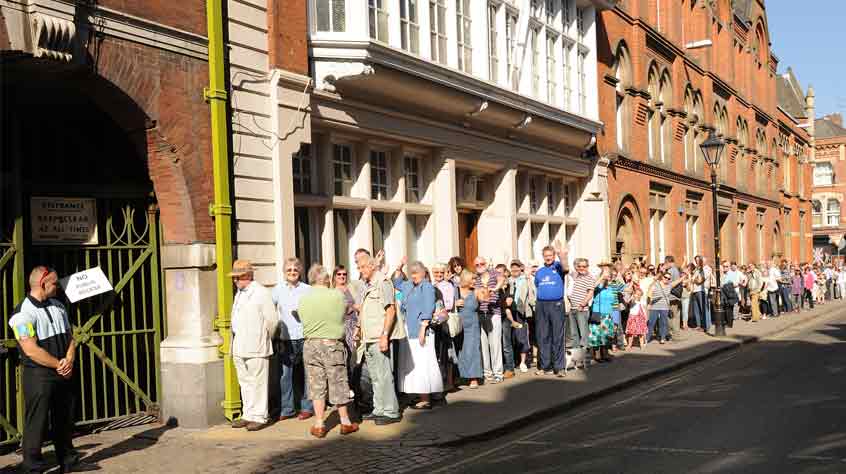 Queues extend around the block during a public open day.

Further archaeological work, finishing the excavation and recording the archaeology.

A press conference at Leicester Guildhall announced to the world’s media the discovery of the skeleton. The press was then invited to visit the site to view the grave. 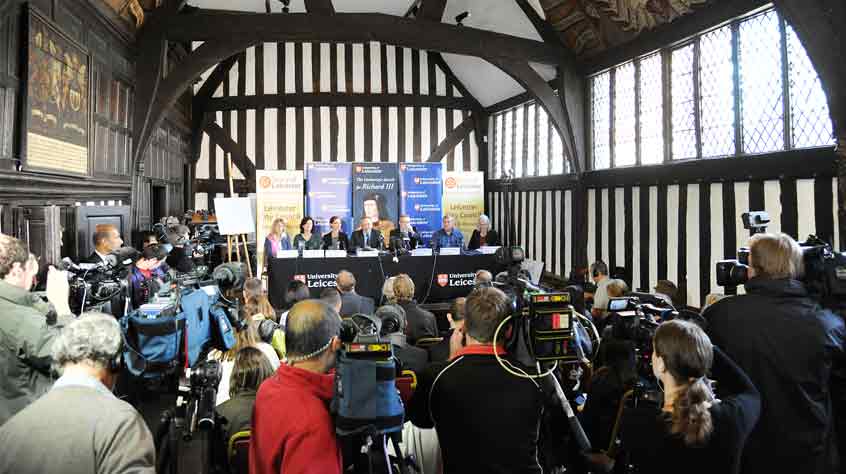 The press conference at Leicester Guildhall on 12 September 2012.

The vulnerable archaeology was covered with a permeable geo-textile membrane and hand-covered with soil to protect it, before the trenches were backfilled using a digger. A marquee was placed over the grave site to protect it from the weather. Greyfriars was once again a car park and a disused school playground.

Despite the ambiguous location, Richard III was found almost complete.

How we preserved the grave for posterity.