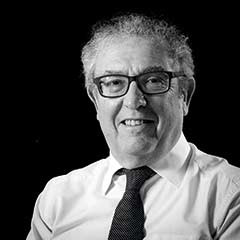 It is with deep sadness we announce that the University of Leicester and University Hospitals of Leicester NHS Trust (UHL) have lost a talented, dedicated and much loved colleague to COVID-19.

Professor Anthony Gershlick, known as Tony, a Consultant Cardiologist at Glenfield Hospital and Professor of Interventional Cardiology at the University of Leicester sadly passed away on Friday 20 November, 2020 in Intensive Care at the hospital he worked in. He was 69.

Professor Gershlick had worked at UHL since May 1989. In December 2018, he formally began work for the University of Leicester, but continued working as an honorary Consultant at UHL.

The recipient of the inaugural British Cardiovascular Intervention Society (BCIS) Lifetime Achievement Career Award in 2017, Professor Gershlick had been involved in coronary intervention shortly after it was introduced in the UK. He undertook his first procedure in the mid-1980s and remained active clinically until he became unwell recently. He had been involved in practice-changing research conceiving, initiating and running four major National and International trials that have changed the way patients are treated. These have been incorporated into International Guidelines.

He was the UK lead for over 10 international trials and attracted more than £3 million of research funding from bodies such as The British Heart Foundation and National Institute for Health Research and the Medical Research Council (MRC).

Professor Nishan Canagarajah, President and Vice-Chancellor at the University of Leicester said:

“Today we are mourning the loss of a dear and valued member of our University community. Tony Gershlick was an extremely dedicated and well-regarded member of our staff who has left an indelible mark on the life of the University. His work has led to a positive change in his field. He will be remembered with great affection by all and will be sorely missed. My deepest condolences go out to Tony’s family at this time.”

Professor Philip Baker, PVC and Head of College of Life Science at the University of Leicester said:

“As an academic, Tony was determined to push the boundaries of clinical care, to make a difference for his patients, and indeed, patients around the world. There will be a time to celebrate his many achievements, but now is a time for sadness – at the passing of a very special person”

“This is devastating news for us all at Leicester’s Hospitals. Tony was a much loved member of the team who will be missed greatly by everyone who knew him. Our thoughts are with his family and I would like to offer our sincere condolences to them on behalf of everyone at the Trust.”

“Tony was well known and well respected, locally, nationally and internationally. He made many significant contributions to the field of cardiology over his long career and was at the forefront of early work on coronary interventions and many significant research studies. He was deeply committed to the training and development of junior doctors and registrars and known for his dedication to his field and his patients. He made a difference to many, many lives.

Since April, Tony had been working in non-COVID environments and was conducting much of his work via virtual consultations. He had taken on caseloads from other consultants to help during the pandemic and had been working tirelessly to provide continued care to cardiology patients. This was typical of Tony, who was well known for his strong work ethic.

We all feel Tony’s loss and those colleagues who knew him well will miss his wise words and sense of humour. Our thoughts are with his family, friends and colleagues here, at the University and across the cardiology community.”