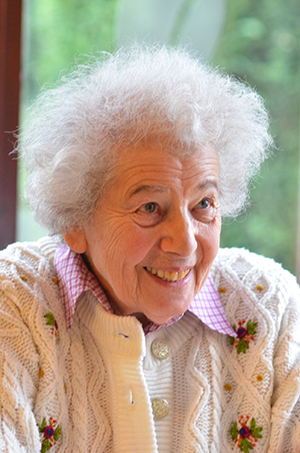 We are deeply saddened to learn of the passing of our dear friend, Holocaust survivor Ruth David. Ruth was a good friend of the University of Leicester, an active supporter of its educational mission, and an associate member of the University’s Stanley Burton Centre for Holocaust and Genocide Studies.

Ruth was born three months before and 30 miles away from Anne Frank. She grew up as Ruth Oppenheimer in the village of Fränkisch-Crumbach in western Germany as part of a rural Jewish community and in a bustling household with five siblings. As a child, she witnessed the escalation of anti-Jewish persecution and violence in the early years of the National Socialist dictatorship. Her account of how the small group of Jewish children were bussed to the Jewish school on an old truck through an increasingly hostile environment regularly made her listeners freeze. When she told the story of how her family’s home was ransacked by Nazi thugs during ‘Crystal Night’, and how her father and brother were deported to the concentration camp of Buchenwald, one wondered how Jews could have survived in the German countryside for more than five years during the Nazi dictatorship.

Ruth’s parents sought refuge for all their children; as a result, Ruth came to England in 1939 on one of the last Kindertransports to leave Nazi Germany. Whilst she and her five siblings miraculously survived in three different countries, both her parents were murdered by the Nazis.

She shared her testimony with hundreds of Leicester students during her numerous visits to our classrooms and lecture theatres. She very much enjoyed discussing her experiences with our students, and would always invite them to work with her to relate her story to contemporary issues. Remembering her last classroom visit, Hannah Thomas commented: “I’m so sorry to hear about Ruth David’s passing - it was so heartbreaking receiving the news. She was a very wise woman that endured so much yet gave great advice to us - definitely the highlight of my university life was meeting her.”

Ruth was an incredibly positive person with a very fine sense of humour. She was very modest when she thought of the impact of her legacy, but she never shied away from publicly sharing her story. One of my fondest recollections of her comes from when we gave a talk at HMP Leicester on Welford Road on Holocaust Memorial Day 2018. The prisoners, many of whom seemed pretty tough guys, took her to their hearts instantly. When Ruth came to the story of how she got out of Nazi Germany, the prisoners started clapping and cheering – a moment of joy that is seldom observed at talks by Holocaust survivors.

Ruth passed away on 6 April 2020 at Leicester Royal Infirmary, as one of the many victims of the coronavirus. We will continue to honour Ruth by ensuring her story is remembered and held up as an example for future student generations to learn from. Indeed, her advocacy for good Holocaust education was rewarded with The Cross Of The Order Of Merit, one of the highest honours in her country of birth, Germany.

Ruth’s last visit to the University of Leicester, 26 November 2019.

The David Wilson Library holds copies of Ruth's memoirs, A Child of Her Time, and of Lifelines, a volume of letters she and her parents exchanged before they were deported to Auschwitz.  Links for press reports on Ruth’ life and for her photographic collection can be found below: