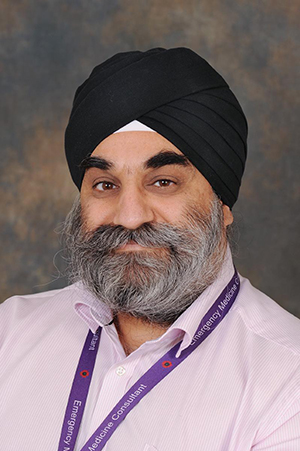 We are saddened to hear of the death of Leicester graduate Mr Manjeet Singh Riyat, Emergency Medicine Consultant at University Hospitals of Derby and Burton NHS Trust, who passed away on 20 April 2020 after contracting COVID-19.

Manjeet graduated from Leicester Medical School in 1992 and went on to train in Emergency Medicine at Leicester Royal Infirmary and Lincoln County Hospital. Before the introduction of paramedics to the NHS, he acted as team leader for the Accident Flying Squads at both hospitals. Manjeet was also one of the first Clinical Research Fellows in the UK and contributed to the birth of academic Emergency Medicine.

He became Head of Service for the Emergency Department in 2006 and made particular contributions to clinical governance and patient safety, as well as serving as Deputy Chair and later Chair of both the Medical Advisory and Medical Staffing committees.

As Derby College Tutor for Emergency Medicine, he oversaw the training of junior doctors from multiple specialties in the Emergency Department. Manjeet also spent 17 years serving as an educational supervisor to dozens of regional Emergency Medicine trainees. He was an active Advanced Life Support, Advanced Paediatric Life Support and Advanced Trauma Life Support instructor and was instrumental in setting up ALS courses in Derby as Course Director.

The Royal College of Emergency Medicine appointed Manjeet as a College Examiner in 2007, as Senior Examiner in 2014 and as Lead Examiner for the FRCEM examination in 2016.

Professor Timothy J Coats, Professor of Emergency Medicine, said: "Manjeet had a big personality, a warm smile and a kind heart. This made him well regarded as a teacher of medical students and as a trainer of junior doctors. His passion for developing the emergency care service and delivering high quality treatment to patients made him a role model as well as a leader."

Katherine Henderson, President of the Royal College of Emergency Medicine (RCEM), said: "He put so much into his role and there are so many trainees and now consultants who benefited from his support. The specialty, his team and RCEM will miss him very much."

Dr Mabs Chowdhury, Consultant Dermatologist in Cardiff remembers fondly: “Manjeet started medical school in 1986 with me and qualified in 1992 as he did a research BSc to follow his academic ambitions. He was a great friend and colleague who was always humble, honest and hard working from his student days. He contributed hugely to his specialty and is widely respected in the UK and beyond for his teaching, examining and clinical knowledge. He will be missed by his many friends from Leicester Medical School who all have huge respect for this true gentleman who was always happy with a huge beautiful smile.”