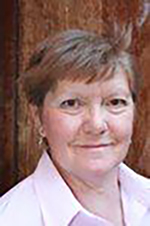 It is with great sadness that we have learnt of the death of Christina Cazalet, Undergraduate Programmes Administrator in the School of Psychology. Christina passed away after a short illness on Sunday 24 May. She is survived by her husband, Michael.

Jose Prados, Head of the School of Psychology, has written the following tribute:

Christina’s passing, after the sudden recurrence of a condition that she had suffered from in the past, has been a total shock for our community.

Christina joined the University of Leicester in 1994 as a Senior Clerk in the School of Social Work. She progressed to Principal Clerk and then Chief Clerk, before becoming Finance and Administration Manager in 2002. In 2016 Christina moved over to NPB as a Research Grants Manager (as the School of Social Work was closed down) and then joined the School of Psychology as a Programme Administrator in 2017. Before joining the University she had worked for the Camping and Caravanning Club, in finance and as a translator for a number of companies. She was a graduate from the Birmingham School of Music and was a wonderful singer.

Christina’s colleagues remember her for her ‘no-nonsense’ and ‘down to earth’ attitude. They recall: “Christina loved travelling to France and she drove Michael there often. She also loved eating out and wine — that had to be red — and gin, but not the fancy flavoured modern stuff. She also went to the theatre regularly and was very much looking forward to her upcoming retirement. She was a very big presence in our office and was always very supportive and caring. We will miss her very much.”

Other friends recall Christina’s passion for racing cars. She and her husband Michael watched all the races and followed all news related to Formula 1, which colleagues always looked forward to discussing with her. One said: “I remember that perky look on her face on the day after Kimi Raikkonen’s last victory, for she and I both liked him. Her emails were always brief and to the point, but in conversation she was candid, witty, and we always had a good laugh. She will be dearly missed.”

Christina’s colleagues admired her practical and pragmatic approach to work. “She wasn’t afraid to speak her mind in order to help out," one said. "She defended Psychology well as well as employee rights with her work in the Unison union. She was very keen to learn new things. I enjoyed listening to her stories of being in Leicester and France. She was always positive and cheery and I will miss our conversations in the office.”

Christina was an interesting and generous person who made the lives of many others better. I would like to invite you to celebrate her life achievements by making a contribution to a donation in her name to MenPhys, a charity that Christina championed.