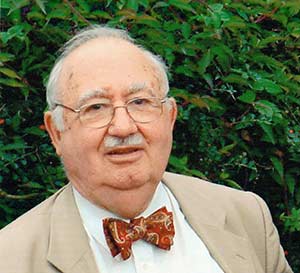 The University community was saddened to learn of the loss, on 24 June 2020, of one of its most senior members and a major figure in its history. John Duncan Cloud (MA Oxford, B.Litt. Glasgow) had taught at Leicester since 1957, the year in which the University received its charter, and rose to be senior lecturer in Classics. He taught mainly Latin literature and Roman history, while his research focused on Roman law, early Roman history, and the Latin satirists. He published many distinguished papers as well as a chapter on Roman law in the Cambridge Ancient History. A complete devotee of Classical learning, he also sought to make its arcana accessible to both specialists in other areas and non-experts wanting to learn more. He was more amused than dismayed by the times he lived through, but never detached from them.

Duncan grew up in Godalming and attended Stonyhurst College before winning a Postmastership (senior entrance scholarship) to read Classics at Merton College, Oxford. After graduation in 1952, he completed three years’ National Service in the Royal Army Education Corps with the rank of sergeant, helping service personnel prepare for civilian life.

After taking his research degree at Glasgow, Duncan was appointed assistant lecturer in Classics at Leicester, being confirmed as lecturer in 1960 and promoted to senior lecturer in 1974. Eight years later he became head of the Department of Classics, at a time of growing crisis. The department had shrunk from its dizzying heights of around a dozen staff in the 1970s, eventually declining to five and then four during 1987. This was despite the introduction of popular new degrees, developed by Duncan in collaboration with the Homer expert Norman Postlethwaite and others, which were highly innovative for those times. BA Classical Studies and BA Classical Studies (Ancient History) were taught ‘in translation’, students not being required to know Latin or Greek, though a paper on the classical languages in context broke new ground in giving students an understanding of the structures of the languages and how they were used. Running alongside existing degrees in Latin, Greek, and Classics, these new programmes were attracting around a hundred applications for the dozen available places by the late 1980s, including many from highly able students. By the start of the 1990s it was not unusual to see multiple Firsts among the graduates, results that were justified by their achievements in later life.

Despite the quality and popularity of the new degrees, the Barron Report of 1987, set up by the University Grants Commission, recommended the transfer of Classics staff from Leicester, as from several other universities, to larger departments elsewhere. In Leicester’s case, however, there was an unusually strong tradition of Ancient History teaching and research, exemplified at that time by the appointment, during Duncan’s headship, of Andrew Wallace-Hadrill, a future director of the British School at Rome. The Barron Report, crucially, left the door open for Ancient History to be maintained at Leicester.

At this point, the imaginative decision was taken to merge this aspect of Classics with the equally small Department of Archaeology, under the headship of Graeme Barker, himself at that time director of the BSR, who was appointed as professor with a mandate to build a new combined department. From the moment of Graeme’s arrival in 1988, Duncan played an important role in designing the combined unit, drawing upon his considerable standing within the University to elicit support for the new venture.

In 1990 he duly became an enthusiastic founding member of the School of Archaeological Studies, which immediately began to grow with internal transfers of staff, and soon with external appointments in both subjects. The last Classics graduates left in in 1991, but Duncan taught Roman history and Roman law until he retired in 1993, by which time the School was beginning to expand and was viewed by the University as of exceptional quality. He remained an active contributor to many areas of the social and intellectual life of the School (renamed School of Archaeology & Ancient History in 2000) for many years, not least in PhD co-supervision. His research flourished, too: nearly half of his forty or so academic papers appeared after retirement.

Duncan’s ironic humour, and a gift for the apophthegm, stood him in good stead in difficult times, and he often wondered whether he should write a comic novel of academic life. He would have had a wealth of material, for his memory for incidents, especially the absurd, was phenomenal. A first-rate linguist, he had a marvellous sense of rhythm and timing, once being heard to remark of a colleague elsewhere that they had been appointed to a post during a period of expansion ‘when it was almost impossible not to get a lectureship’. Colleagues recall his urbane speeches, particularly his retirement oration, in which he pretended that soon after coming to Leicester and after sharing an office with a certain young lady classicist for a prolonged period, he felt it was only decent to make her an offer. That young lady was Jean Allison, who became Duncan’s wife and co-author of one of his papers.

As head of department he was wise, realistic, and humane. He is remembered by former junior staff and part-time tutors as a supportive and understanding mentor, and by graduates as a generous host, the kindest of tutors, and an engaging lecturer with a particular gift for the unforgettable one-liner. Former students recall the tours of Roman sites in Britain, led by Duncan, as highlights of their degree. Another remembers his asides during lectures, in one of which, after quoting Aristotle, Duncan paused and added, ‘I don't think Aristotle had much insight into literature’.

Duncan was an influential figure in the University, commanding wide affection and loyalty, as exemplified by his popularity as Acting Dean for a term in the late 1980s. Staff in other departments and faculties have paid tribute to his intellectual generosity, for example in sharing his compendious knowledge of both Classics and Catholicism as a background to their own researches in History or English. His anecdotes about the Senior Common Room included a memory, from his earliest years here, of puritanical members pushing through a resolution banning alcohol; this was soon rescinded, no doubt facilitating the leading role Duncan would play for many years in the staff Wine Club. Fond of country walks, Duncan and Jean enjoyed introducing younger colleagues to the best pubs around Leicestershire and Rutland.

Beyond the county, he was a well-liked figure at the Institute of Classical Studies in London, to whose library he made regular visits, and had strong academic connections with scholars in Germany. A devout Catholic, he played an active role in the life of the Church, writing letters to the Tablet and for many years visiting housebound parishioners. On the professional level, after the inauguration of the Second Vatican Council (1962–5), he was invited to make expert contributions to the International Commission on English in the Liturgy, attending meetings in the UK and North America. Sometimes irreverent in private, he would confess to liberal (with a small ‘l’) leanings, being tolerant of different opinions and lifestyles. He always looked for the best in those around him, something from which the world could learn much today.

Duncan is survived by his wife of sixty years, Jean (née Allison), and their daughters Frances and Elizabeth.

It is hoped to organize a commemorative event later. Attendance at Duncan’s funeral on 20 July 2020 will necessarily be limited in this time of lockdown, with family flowers only, but donations in memory may be made to WaterAid c/o A. J. Adkinson & Son Funeral Directors, 12 London Road, Oadby, LE2 5DG (tel. 0116 271 2340) or at www.ajadkinsonandson.com.