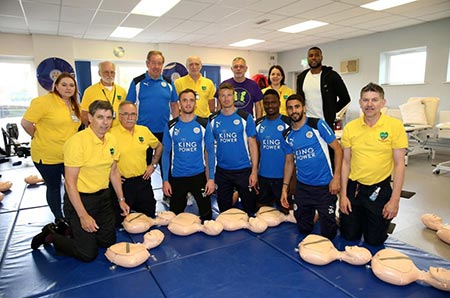 A new generation of lifesavers is emerging thanks to a unique and original resuscitation training programme spearheaded by the University of Leicester and University Hospitals of Leicester NHS Trust. It involves every secondary school in Leicestershire and has been extended into Rutland, as well as engaging widely with community groups. In February 2016, the campaign to equip schoolchildren with essential lifesaving skills – Heartwize – was launched nationally.

The programme was conceived and initiated by the University of Leicester and Leicester’s Hospitals with cardiologist colleagues Dr William Toff, Associate Professor at the University, and Dr Doug Skehan from the Hospital Trust. Their aim was clear: to teach as many people CPR as possible.

During a royal visit, the Duke of Cambridge found out more about Heartwize - our unique, charitably-funded resuscitation training programme.

If, through training, survival rates in that 30,000 could be raised to 25% it would save 12,000 lives a year. That’s the equivalent of preventing an aeroplane crashing every 10 days.

Experience in other countries suggests that teaching life-saving skills to schoolchildren is feasible and effective but efforts to have this training included in the UK national curriculum have been unsuccessful. That’s where Heartwize has stepped in – winning hearts and minds in the process. 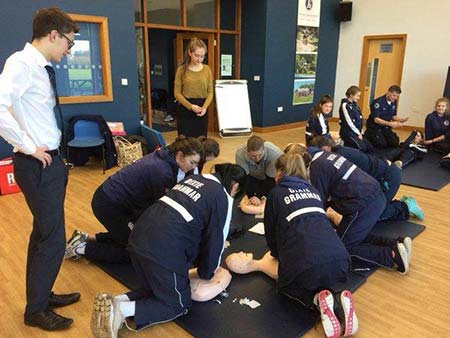 The Heartwize Schools Programme has delivered over 500 school training sessions, trained over 250 volunteer community trainers, 16,000 students and 600 school staff and provided every secondary school with an Automated External Defibrillator (AED).

The team has also expanded its activities to the wider community partnered with major local sports clubs holding half-time demonstrations on the pitch at Leicester City Football Club, the Leicester Tigers, Leicester Riders and Leicestershire County Cricket Club. In an amazing turn of events, it was also widely reported that the life of Leicester City ambassador Alan Birchenall was saved by an AED – for which he helped campaign as part of Heartwize.

A particular challenge has been to ensure the ready availability of volunteer trainers to maintain a high ratio of trainers to pupils (typically 1:5) in the hands-on training sessions. To facilitate this, a partnership with the University of Leicester Medical School has seen students entering their cardio-respiratory module receive refresher training and are inducted into the Heartwize programme. They are encouraged to deliver training in the schools and form ongoing links with one or more schools.

Supported by charities and volunteers, the total cost of the programme to date is in the region of £120,000 but the commercial value of what has been provided is thought to be over £2 million. The estimated cost of training is approximately £2.50 per student.