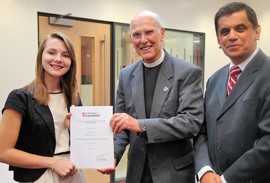 We have learned, with regret, of the death of the Very Reverend Derek Hole, an Honorary Graduate and long-time supporter of the University.

Born in Plymouth in 1933, Derek Hole felt called to the priesthood from a young age. After national service in the RAF and a period as a librarian at All Souls College, Oxford, he attended Lincoln Theological College. In 1960 he was ordained a deacon and appointed Assistant Curate of St Mary Magdalene Church in Knighton. He was ordained a priest in 1961.

After holding positions in South Africa, London (briefly), Warwickshire and Northamptonshire, Rev. Hole returned to Leicester as Vicar of St James the Greater. This is the church on the opposite side of Victoria Park from the University, and so a close association with this institution naturally followed. 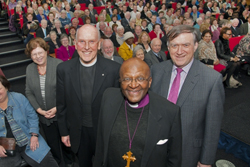 Rev. Hole sponsored an annual student prize in the Department of Cardiovascular Science and also an annual public lecture on theological/moral topics, co-ordinated by the Chaplaincy. In 2012, drawing on his South African connections, Rev. Hole was able to arrange for that year’s lecture to be delivered by Nobel Peace Prize Laureate Archbishop Desmond Tutu.

Rev. Hole was made a Chaplain to HM The Queen in 1985, and in 1992 moved from St James the Greater to Leicester Cathedral, where he served as Provost until his retirement in 1999. In 2005, the University awarded him an Honorary Doctorate of Laws.

There will be a Requiem Mass for Rev. Hole on the evening of Friday 24 September in the church of St James the Greater, and the funeral will be at 11.00am on Saturday 25 September. These will be sung services, accompanied by choir and organ, and everyone is welcome at both services.