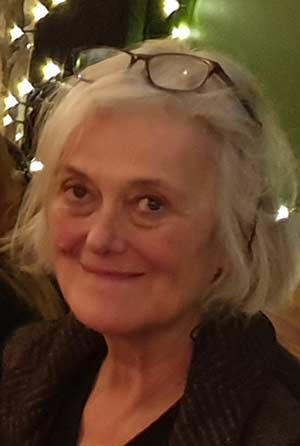 University of Leicester Archaeological Services are sad to announce the death of Deborah Sawday on Tuesday 19th October, at the age of 77, after a long illness. Debbie was our medieval pottery specialist and had built up an encyclopaedic knowledge of her subject over more than forty years, with upwards of 1,000 published reports to her name, including chapters in the recently-published Life in Roman and medieval Leicester volume.

Debbie joined ULAS from the beginning, in 1995, when it emerged from the ashes of the County Museum Service’s Archaeological Field Unit, which she had joined in 1974, after a short career in secondary teaching. Debbie took a degree in Modern History at Manchester from 1963 to 1966, and after a year on VSO, teaching in Malawi, completed a PGCE at Leicester in 1969, before teaching in London and Leicester.

Debbie was an amazingly colourful character, great fun to be around and involved with much more than just pots, of course. Very much a child of the sixties, Debbie was ‘Green’ before it was trendy, never owned a car, cycled everywhere and was a passionate campaigner for Friends of the Earth and CND. Her colleagues were used to having the latest petition thrust into their hands for signing, on entering the office!

Debbie’s passing has left a huge hole in the ULAS team and in many people's lives and we will continue to miss her for a long time to come. Her funeral will take place at Great Glen Crematorium at 10.30am on Friday 5th November. No flowers, but donations to LOROS, if desired, c/o A. J. Adkinson and Son, Funeral Directors, 12 London Road, Oadby, LE2 5DG.