The University has learned, with sadness, of the passing of Joyce Chapman. Joyce's daughter Kay has provided the following obituary and photographs.

Joyce was married to the late Aubrey Chapman and had six children.

Joyce had a long association with Leicester University where she worked in a variety of roles. She was the Supervisor of the Senior Common Room for many years and was loved and respected by the academic staff whom she treated as she would her own children: fair, firm and fun! Dr KC Phillips, Senior Lecturer at Leicester University, wrote an amazing tribute when Joyce first retired: 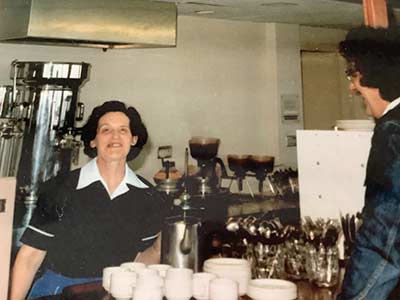 When people crowd around and block the view,
And Chaos in her wilful way rejoices,
Whose is the voice that makes them keep the queue?
It's Joyce's.

When junior lecturers are all obstreperous,
Calling out rude remarks in strident voices,
Whose is the tongue that calms their rage tempestuous?
It's Joyce's.

When bureaucrats advance with bills to pay
And forms to fill, and likewise with invoices,
Whose is the mind that keeps them all at bay?
It's Joyce's.

Queen of the counters, hostess of the 'teas'--
Heard above all the clatter and the noises;
Who is it we commend in lines like these?
Why, Joyce 'tis." 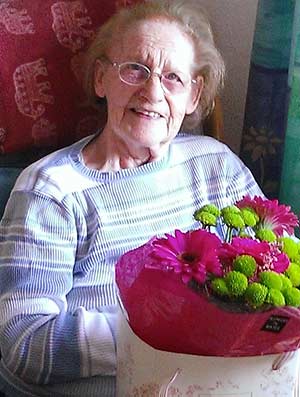 Joyce was very proud of being Supervisor in the Senior Common Room so found it hard to retire and the University didn't want to let her go! She went back to run the lunchtime cafe at the Richard Attenborough Centre (now Attenborough Arts) and was made an Honorary Friend of the Richard Attenborough Centre as a token of recognition for everything she did for them. Joyce was also much in demand to oversee functions at Knighton Hall and took much pride in the fact that the Vice Chancellor, Ken Edwards, would send his chauffeur, Gerry, to take her to and from home.

Just recently Joyce said, “People like Richard Attenborough, they were so nice and interesting. He was a special friend." After Richard had spent the night at Knighton Hall, Joyce regaled that he came down for a cup of tea early in the morning and said, "I knew you would be here, Joyce!" Joyce loved her friends at Leicester University and her good friend, Sulina, tells of the continual stream of visitors, academics and students alike, who would turn to Joyce for comfort and advice along with their food and drink. Joyce used to say, "They made me feel important. It was my special world, my domain."

Joyce's family will always be grateful to the staff and students of Leicester University who returned to her the love and respect she always felt for them.

Donations in her memory may be made to the British Heart Foundation.