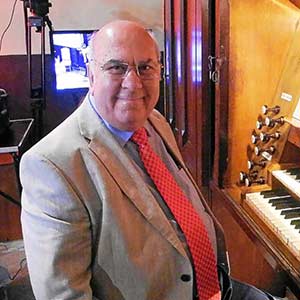 The University has learned, with regret, of the death of Mr Ian Imlay MBE, who for more than 30 years played the organ at our graduation ceremonies.

Mr Imlay was born in 1937, just a few streets away from De Montfort Hall. By the age of 11, he had become organist at the Isolation Hospital chapel on Groby Road, for the not inconsiderable salary of £10 per year. At 16 he became organist of Kilby Parish Church, often deputising at St Peter’s Church in Oadby.

He continued to play the organ through his National Service; then, on his return to civilian life he found himself headhunted by members of the clergy looking for an organist. One of them was Reverend Arthur Widdess, who had been the first Chaplain here at the University, and who was then the vicar of St Nicholas Church in the city centre. Mr Imlay was appointed organist at St Nicholas and still held the position when he passed away earlier this month, having played the organ there for more than 60 years.

In 1983 the University conferred on Mr Imlay an honorary degree of Master of Music (MMus). From that date onwards, he generously provided his time and skill to play the DMH organ at all of our graduations. His music accompanied the processional entrance and departure of the Chancellor, Vice-Chancellor, senior academics, honorary graduands and the University mace, and he also provided accompaniment for the singing of the National Anthem. His final performance was at the July 2019 graduations.

In 2013, Mr Imlay was named a Distinguished Honorary Fellow, the highest award that the University can bestow. The previous year his services to church music were acknowledged when he was summoned to York Minster to receive the Royal Maundy money from HM The Queen, and in 2017 he was awarded an MBE for services to music.

As an active member of Leicester and District Organists’ Association (LDOA), Mr Imlay loved visiting churches to see other organs and play them. He was also a generous supporter of charitable causes. In June of this year, inspired by Captain Sir Tom Moore, Mr Imlay challenged himself to play 84 hymns to celebrate his 84th birthday, raising more than a thousand pounds in sponsorship. This was shared between LOROS, Rainbows and AKT, a national charity that works with LGBT+ young people dealing with homelessness and debt.

Mr Imlay's funeral will take place at St Nicholas Church on Thursday 9 September at 10.00am, followed by a private cremation. As numbers are limited, this can be viewed live on the church's Facebook page. It will also hopefully on the church's YouTube channel (if not live then later).

There will be a Musical Thanksgiving Evening at Leicester Cathedral on Saturday 30 October, at 7.30pm, when all are welcome.