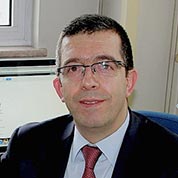 Mustafa Arici, MD., is Professor of Medicine (Nephrology) at Hacettepe University in Ankara, Turkey. He is an ERA-EDTA (European Renal Association-European Dialysis and Transplantation Association) Council Member since May 2015. He is a member of the Science Academy of Turkey since 2014. He undertook his undergraduate and postgraduate educations in Faculty of Medicine, Hacettepe University. He received his residency training in Internal Medicine (1992-1996) and served a fellowship in Nephrology (1997-2000) in the same faculty. He has awarded a training grant from International Society of Nephrology (ISN) and studied in the field of “proteinuria and renal fibrosis” for two years in the Department of Nephrology, University of Leicester, UK as an ISN fellow.

Dr. Arici’s main research interests are concentrated on chronic kidney disease and hypertension with a special focus on mechanisms involved in progression of kidney disease, albuminuria and fibrosis, cardiovascular risks and complications in CKD and dialysis, epidemiology of hypertension and cardiorenal risks of sodium consumption.

He has acted as principal investigator in the “PatenT (Prevalence, awareness, and treatment of hypertension in Turkey) I-II, HinT (Hypertension incidence in Turkey) and SALTURK (The Relationship between Hypertension and Salt Intake in the Turkish Population) I-II studies” in Turkey. He is a member of the “Turkish FMF Study Group”.

He was the author or co-author of numerous articles and book chapters in Turkish and English. He is the editor of the book “Management of Chronic Kidney Disease: A Clinician’s Guide” published by Springer. He is an editorial board member of “Kidney Research and Clinical Practice” since 2012. He is associate editor of “BANTAO Journal” since 2009. He serves as a “theme editor” for “Nephrology Dialysis and Transplantation” since 2017.

He is married and father of two lovely daughters.