The Franciscan Friars (often called the Grey Friars from the colour of their garments) came to England in 1224, around a year before the death of St Francis of Assisi, their founder, and had arrived in Leicester before 1230. Tradition dating back to at least the 16th century holds that the friary was found by the 6th Earl of Leicester, Simon de Montfort. Whilst this is unlikely, as the friars were in Leicester before de Montfort received the earldom, it is probable that he and his wife, Eleanor were early benefactors.

The friary (1) occupied a large walled precinct west of Leicester’s Saturday marketplace (2), between two important medieval thoroughfares, Friar Lane (3) and St Francis’ Lane (4) - today known as Peacock Lane - both linking the town’s high street (5) and the south gate (6) with the Saturday market. This was a perfect place for the friars to beg for alms outside the friary on streets which were sure to have a regular flow of traders and passers-by. 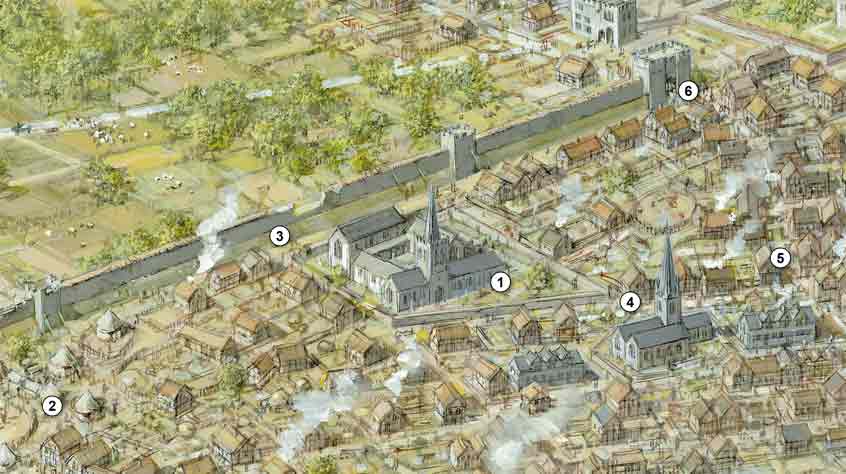 Artist’s reconstruction of the Grey Friars quarter of medieval Leicester in about 1450. Artwork: Mike Codd.

Friars took the same vows of poverty, chastity and obedience as monks but did not live in secluded communities, instead they taught and preached among the local people, on whose charity they are dependant.

The first reference to the friary’s church dates to 1255 with the nave and north aisle completed thirty-five years later in 1290. The nave of the friary church would have been accessible to the public, while the rest of the buildings were private. These included a chapter house, refectory, infirmary and possibly a theology school. The friary also had large areas of garden within its precinct and a cemetery was situated between the church and St Francis’ Lane.

Little else is known about the history of this important medieval institution. In 1402 the friary became notorious when a group of its friars, along with others from the East Midlands, were executed for treason for spreading a seditious rumour that Richard II (d.1400) was still alive and planning on reclaiming his throne from Henry IV. In 1414, Henry V held a parliament at the friary but to this day it is best known for Richard III’s burial in the church choir in 1485.

At its peak in the mid-14th century there may have been 20-30 friars in residence but by the time it was surrendered to Henry VIII’s commissioners on 10 November 1538 only seven remained and the friary was very poor and subsisting largely on alms (it had an annual rental value of £1 4s, a fraction of the wealth of Leicester Abbey, which was valued at £786 16s 1¾ d).

In 1545 the Grey Friars site was sold to John Bellow and John Broxholme, 16th-century property speculators from Lincolnshire who bought up numerous similar sites across the England, including Leicester’s Augustinian Friary – and the remaining buildings were demolished with some of the timber and stone used to repair St Martin’s church (Leicester Cathedral today). 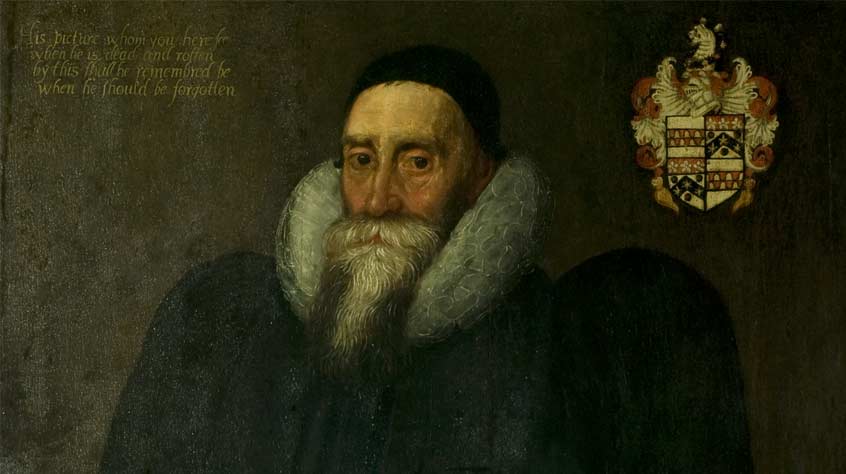 By the late 16th century Robert Herrick (1540-1618), a prosperous alderman and sometime mayor and MP for Leicester, had acquired the land. The Mayoral Roll records: “For some years prior to his death, he resided in a mansion house within the precincts and grounds of the dissolved Grey Friars monastery, nearly opposite St Martin's church.” The house was built in the south-eastern part of the grounds and the rest of the precinct was laid out as gardens and orchards. Greyfriars House remained in the possession of the Herrick family until 1711, when Robert’s great-grandson Samuel Herrick sold it.

In the following decades the property was divided and sold off. In 1743 New Street was laid through the site and in 1759 a fine new townhouse was built on part of the land. This still survives today as 17 Friar Lane. In 1776 Greyfriars House was sold to Thomas Pares, who in 1800 established the bank Pares & Co. in the north-east corner of its garden. Herrick’s mansion was finally demolished in 1871 to make way for a new street, Grey Friars which was laid through the site in 1873, and the remain land was sold for commercial development. 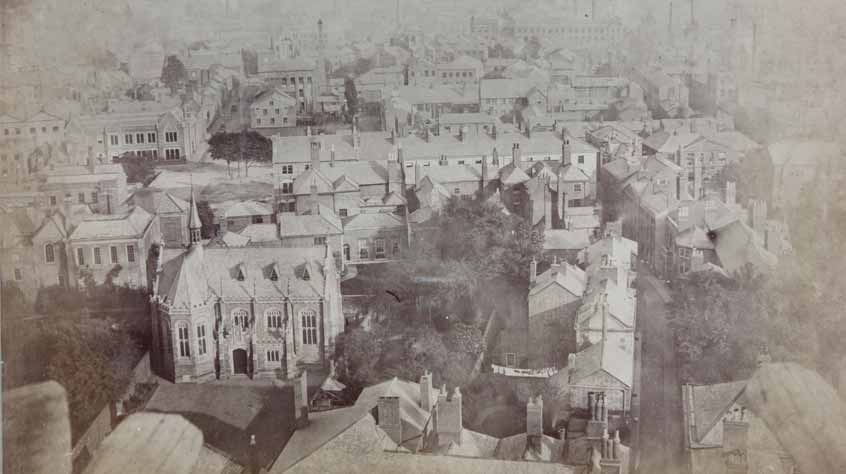 A view of the Grey Friars area taken from St Martin’s steeple in 1867, looking south. The gothic building in the foreground is Alderman Newton’s School before it was extended in 1887 and 1897. To the left, behind the school is Robert Herrick’s mansion. King Richard’s grave was found in the garden to the right of the school. Image: Leicestershire Record Office.

Part of the land at 17 Friar Lane was sold in 1863 to the Alderman Newton’s Boys’ School and after 1915 the remaining property was acquired by Leicestershire County Council. Smart new offices were constructed in the 1920s and 1930s, which were used until 1965, when County Hall was opened. Since then, the buildings were used by Leicester City Council, with the remaining garden repurposed as a staff car park, by which time all trace of the friary was lost.

See more about the discovery and identification of Richard III

More about the excavation to find the remains of Richard III - from pinpointing potential locations and the digging of the trenches, to locating the remains and preserving the grave.