After the battle, Richard’s corpse was returned to Leicester, accompanied by Henry Tudor and the victorious Lancastrian army. An account of about 1486 says that ‘Richard’s body was found among the other slain… many other insults were heaped on it, and, not very humanely, a halter was thrown around the neck, and it was carried to Leicester.’ Another mentions that Richard’s body was ‘covered from the waist down with a black rag of poor quality, [henry VII] ordering him to be exposed there three days to the universal gaze.’ 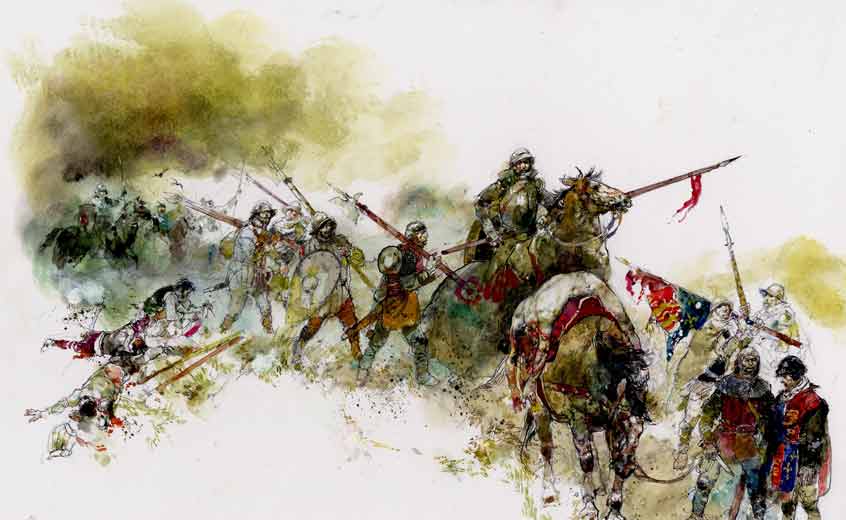 By all accounts, Richard’s body was not treated well after the battle, but the public display of his corpse had a purpose. The people of Leicester were the last to see the king alive before he marched off to battle. In an age before live news broadcasting, allowing them to see the dead king’s body would allow word to spread that the Richard was truly dead, thereby preventing the appearance of potential imposters who could be the focus of further dissent.

Richard’s body was probably buried on 25 August, the day Henry left Leicester for London. The Tudor historian Polydore Virgil, wrote in the early 16th century that Richard ‘was brought to the Franciscan monastery at Leicester, a sorry spectacle but a sight worthy of the man’s life, and there it was given burial two days later without the usual funeral rites.’

Burying defeated and deposed monarchs in religious houses away from the political hub of London had precedent. Fourteen years earlier, Henry VI was initially buried at Chertsey Abbey in Surrey, before Richard III himself had him reburied at St George’s Chapel, Windsor. Friaries were also commonly chosen as resting places for the executed dead if they were of high standing.

We will never know for certain why the church of the Grey Friar’s in Leicester was chosen to be Richard’s resting place. Perhaps is was because Henry VII was a devotee of St Francis, or because the friars had asked to bury him, or perhaps the choice was more pragmatic. The friary church stood opposite the town hall where it would have been easy for the local authorities to keep an eye on the grave.

A decade after Richard’s death, Henry VII decided that a suitable tomb should be placed over his predecessor’s grave, a small but symbolic act of reconciliation. No detailed description of the tomb survives but later chroniclers, some of whom may have seen it before it was destroyed during the dissolution of the friary in 1538, suggest that it bore a carved likeness of the king on a coloured alabaster slab.

The timing of the tomb’s commissioning was significant. In the early years of Henry’s rule, he was forced to contend with several Yorkist pretenders to the throne. The most serious of these was a young man called Perkin Warbeck, who claimed in 1491 that he was Richard of Shrewsbury (the younger son of Edward IV and one of the princes in the Tower). In England, old loyalties to the House of York resurfaced and in July 1495, Warbeck led an unsuccessful invasion of England. It was against this backdrop of unrest that Henry VII decided to erect a tomb to Richard III, and it cannot be a coincidence that the date of commission coincided with Warbeck’s invasion attempt.

The fate of the body