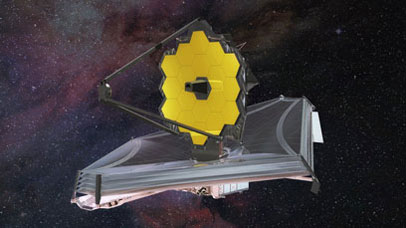 University of Leicester scientists and engineers are involved in a major new space telescope, the most advanced observatory every built, launched in December 2021 via an Ariane 5 rocket from ESA’s spaceport in Kourou, French Guiana.  The James Webb Space Telescope (JWST) is seen as a successor to the Hubble Space Telescope, but operates primarily at near- and mid-infrared wavelengths to enable the detailed exploration of the high-redshift and obscured universe, with likely targets ranging from nearby stars, extra-solar planets and our own solar-system, to the most distant and earliest galaxies and stars. JWST is a joint project of NASA, the European Space Agency and the Canadian Space Agency.

At 6.5-m diameter, its segmented primary mirror has over twice the diameter of the Hubble mirror, making it more than 400 times more sensitive than current ground-based or space infrared telescopes. JWST spans the long-wavelength visible and the infrared spectrum from 0.6 to 28 µm with a set of four science instruments, and will spend five to ten years in operation, orbiting around the L2 Lagrange point (1.5 million kilometres from Earth).  It features a very large sunshield (22 x 10 m) to cool the telescope and permit it to view objects in the infrared.

There will be four science instruments on the JWST Integrated Science Instrument Module (ISIM):

The key scientific goals of JWST span the whole range of scientific interests of University of Leicester scientists, including “First Light and Reionization” in the early universe, “Assembly of Galaxies,” “The Birth of Stars and Protoplanetary Systems,” and “Planetary Systems and the Origins of Life.”