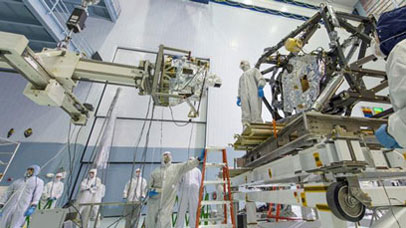 University of Leicester scientists and engineers have been involved in the JWST project for more than twenty years.

The University of Leicester Space Research Centre, in the School of Physics and Astronomy, has provided the Mechanical Engineering Lead for the Mid-Infrared Instrument (MIRI), has been responsible for design and provision of the MIRI Primary Structure (in collaboration with the Danish National Space Centre), and provides support for MIRI test and calibration activities.

MIRI has been developed jointly by Europe and the USA. The European Consortium for MIRI is led by STFC’s Astronomy Technology Centre, Edinburgh, managed by Airbus Defence and Space UK, and the AIV (Assembly, Integration and Verification) and Thermal Leads are provided by STFC’s RAL Space near Didcot, Oxfordshire. The UK contribution to MIRI is funded by the UK Space Agency.

MIRI consists of two separate channels which provide high-resolution images and medium-resolution spectra in the 5-28 μm band.  The imager subsystem consists of a filter wheel, folding optics and a solid-state infrared detector. It is capable of providing diffraction-limited images with a pixel size of 0.1 arcsecond. The three detectors, which have been provided by the US, are each a 1024 x 1024 Si:As detector array; the imager has one detector and the spectrometer has two. The filter wheel includes a grism for low-resolution spectroscopy (R ~ 100 for 5-10 µm) and various phase masks for coronography. The operational temperature of MIRI is ~7 K. MIRI has overall dimensions ~1 m3 and mass ~100 kg.  The spectrometer sub-system consists of an integral-field spectrometer that can provide spatially-resolved spectroscopy, with a spectral resolution of R ~ 3000 at 5-30 μm and a field-of-view varying from 4" to 8" depending on the wavelength. It incorporates two infrared detectors, identical to the one used in the imager channel. 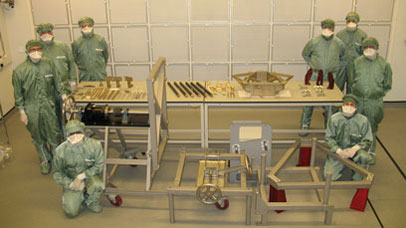 The Flight Model of MIRI was delivered to NASA in May 2012, and has been fitted into the JWST Integrated Science Instrument Module (ISIM) which houses all the science instruments.

As well as heavy involvement by University of Leicester engineers and scientists in the MIRI instrument development, University scientists are strongly participating in the JWST science programme, in a wide range of projects covering many aspects of astrophysics and planetary science, described in more detail in our pages.