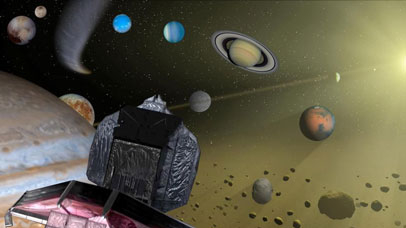 JWST will be able to map the infrared spectra (reflected and emitted) from surfaces and atmospheres of the major planets, satellites, and minor bodies throughout our Solar System.  This will access regions of the spectrum that are impossible to view from the ground, either due to the weak signal or our own opaque atmosphere, allowing us to diagnose the chemistry, dynamics, geophysics, and clouds on these distant worlds.

Leicester planetary scientists are leading Guaranteed-Time Observations (GTO) of the four giant planets during the first cycle of JWST observations, aiming to characterise the atmospheric circulation on Uranus and Neptune; explore the mysteries of Jupiter's Great Red Spot; and monitor the evolution of Saturn's seasons and polar hexagon.

In addition to competitive proposals to JWST's Guest Observer (GO) programme, Leicester researchers also play a key role in the Early-Release Science programme (ERS) for observations of the Jupiter system, from the influence of the powerful aurora, to the surface composition of the Galilean satellites.