The fourth season of the Bradgate Park Fieldschool focused on a two and a half storey rectangular structure, located to the south of Bradgate House, which features on three 18th-century illustrations of the estate and is visible as a parch-mark on aerial photographs within the park.

This was hypothesised to be either a stable block, constructed for the visit of King William III in 1696, or the gatehouse, evidence for which exists in texts curated at Manchester University Library. 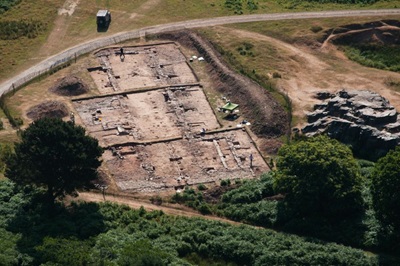 Excavations provided evidence of a substantial building (48m x 9m) with foundations constructed from local stone. The near complete absence of internal surfaces, upstanding structures and demolition debris indicates that it had been thoroughly stripped after it went out of use. It was originally presumed that the superstructure would have been brick built in order to match the architecture of the house, but there was no evidence to support this theory.

A cobblestone carriageway led to the building from the entrance of Bradgate House, fanning around a central porch on the north side of the building. To the immediate west of the porch was an entrance providing access to an L-shaped external staircase which led to the first floor of the building. The building had been extended in the south-west corner, giving it an L-shaped floor plan; a later doorway had also been inserted into the east wall. The interior of the building was fairly empty, save for a couple of deposits of brick, indicating the presence of an original herringbone pattern floor. There was however a line of at least 22 post-holes (approximately 1.6m apart) along the full length of the building, presumably forming the remains of partitions between individual stalls to accommodate c. 25 horses. 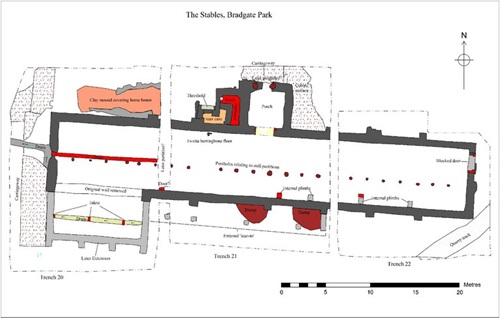 A lean-to structure was built against the south (back) wall, with two distinct spreads of finds rich soil recorded beneath this. The finds here included vast quantities of clay pipe, 17th and 18th century pottery and various metal finds, including buckles, stirrups/spurs and leather tacks; this presumably represents the base of a manure or rubbish heap relating to the building. Outside the north-west front of the building a curious mound was discovered, revetted with diorite blocks and filled with a thick layer of horse bone. These bones consisted predominantly of limbs and were mostly disarticulated. Possible interpretations for this structure include a horse mounting platform or a much later earthwork relating to military training exercises. 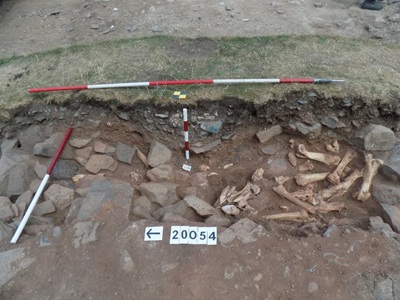