The fifth season of the Bradgate Park Fieldschool ran from the 20th May to the 5th July 2019, with a public open day on the 29th June. This year, we focussed on two areas of excavation: Bradgate House and a possible medieval settlement to the east.

Excavations in season 1 and 3 called into question the known sequence of building at Bradgate House. An evaluation trench excavated in season 1, placed across what was thought to be a laundry connected to a porters lodge, showed no clear evidence of the building’s function. The demolition evidence suggested it could form part of an earlier phase of occupation that predated the house, with all later stratigraphy removed within this part of the site. Follow-up excavations in season 3 revealed that the building was larger than originally thought. A discontinuous wall on the western side was eventually revealed to be a partition rather than an end wall, suggesting that the building extended further (west) into the courtyard. The flagstone floor on the southern side of the building terminated at an east-west aligned beam slot, representing an internal partition. The stone floor surface and partition relate to the last use of the building when a drain was cut through the east and west walls. An extension to the eastern side of this trench indicated a mixed stone and brick phase constructed on a different alignment to the upstanding chapel, predating the ruins and suggesting at least two phases of earlier building activity. The excavations did not yield a construction date for the stone and brick structures, but they appear to have been demolished by 1550, raising new questions about the phasing of the house during the time when Lady Jane Grey was resident.

Excavations in season 5 clarified the westward extent of this courtyard building and further investigated its relationship with upstanding structures to the east. 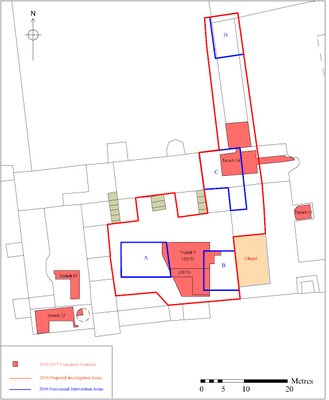 The spring of 2015 was particularly dry and as a result of this, several parch marks indicating previously unrecorded wall lines were revealed. This included the possible gable end of a building within the northernmost room of the eastern wing (previously interpreted as a parlour). The wall appeared to line up with a building range extending northwards that has been interpreted as guest lodgings. In season 3, excavations explored these parch marks and exposed stone footings appearing to represent the original southern wall of the guest lodging. This must therefore have originally been a free-standing building, pre-dating the construction of the parlour, as previously supposed. Although this structure is not on the same alignment as the courtyard building, similar stone foundations suggest it may be part of the same complex. A stone footing running from the south-western side of the building appeared to line up with the chapel. The long, narrow range, thought to represent the guest lodging, extended northwards from the centre of the parlour. There was a level change between the demolished and the extant part of the structure, which is significantly higher. A fireplace with a tiled hearth, was present on the western side and may provide a clue to the original level of the floor. An area of quarry tiles near the entrance to the parlour appeared to demarcate a possible corridor or passage that runs between two blocked up doorways on the east and west sides of the building.

Excavations in the parlour sought to clarify the southward extent of the stone footing (which appears to line up with the chapel) and confirm its relationship with other upstanding structures. 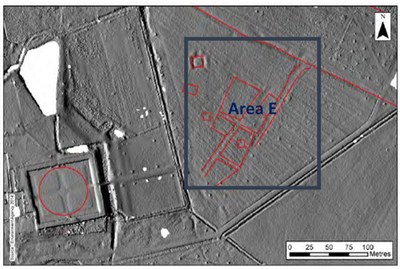 To the east of the house, a LiDAR survey undertaken in 2014 revealed a series of hollow-ways and platforms. A resistivity survey undertaken in 2015 showed a series of low resistivity anomalies corresponding with the alignments of these features, suggestive of possible ditch systems. Little else is known about this area, but it was postulated that these features could form the remains of the lost village of Bradgate, or a unique temporary workers village connected to the construction of Bradgate House. This season, a small-scale targeted evaluation was undertaken in order to clarify the nature and date of these features. Two intersecting trenches were opened up, but no evidence for medieval or Tudor activity was identified. The only archaeological features were two ditches of uncertain date and function.

An interim report was produced detailing the results of the 2019 season.