Where did we dig?

For the third season of excavations at Bradgate Park we focussed on two areas: Bradgate House and an enclosure of unknown date and function located to the south of Bradgate House within the Deer Sanctuary.

During the first excavation season in 2015 a building located within the courtyard area was evaluated, described on the Bradgate House plan as a laundry. The building had stone footings, distinguishing it from the upstanding ruins of Bradgate House. Dating evidence from the demolition rubble suggested it could be part of an earlier phase of occupation. The main objectives for 2017 were to confirm the layout and look for evidence to help understand its development and function, particularly its relationship to the other buildings on the site. 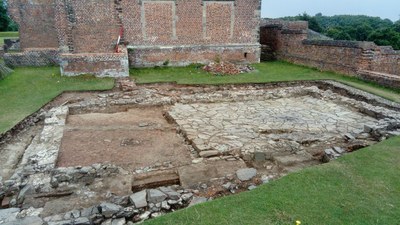 An extension to the eastern side of the trench, revealed several brick structures, indicating a mixed stone and brick phase. A later brick structure added on the east side was on a different alignment to the existing chapel, indicating that it is earlier than the Bradgate ruins. We do not yet have a construction date for the structures but they appear to have been demolished by 1550, raising new questions about the phasing of the house.

Trench 14 was positioned to explore parch marks suggesting unrecorded wall lines within the northernmost room of the eastern wing (previously interpreted as a parlour). These appeared to represent the gable end of a building lining up with a range extending northwards described as guest lodgings. The trench exposed stone footings appearing to represent the original southern wall of the guest lodging. This must therefore have originally been a free-standing building, pre-dating the construction of the parlour, rather than being a later addition as previously supposed. Although the structure is not on the same alignment as the courtyard building, similar stone foundations suggest it may be part of the same complex. The removal of the levelling layers covering the demolished wall revealed a brick plinth, resting on stone foundations and bordering an area of loose rubble to the west.  A stone footing running from the south-western side of the building appears to line up with the chapel. The depth of sediment and rubble within the building was surprisingly deep, hinting at the existence of a cellar/undercroft. A sondage excavated by the side of the foundations revealed possible bedrock; if so this may suggest levelling over an outcrop. A rich finds assemblage included fragments of fine imported Venetian glass, as well as Cistercian and black wares dating the infill of the building to the 16th/17th century. 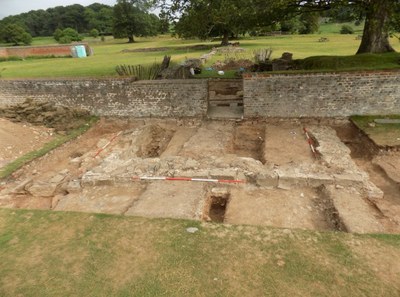 The long, narrow range, thought to represent the guest lodging, extended northwards from the centre of the parlour. There was a level change between the demolished and the extant part of the structure, which is significantly higher. A fireplace with a tiled hearth, was present on the western side and may provide a clue to the original level of the floor. An area of quarry tiles close to the entrance to the parlour appeared to demarcate a possible corridor or passage that runs between two blocked up doorways on the east and west sides of the building. A widespread but thin layer of stones was present to the north of the tiles represent consolidation under a floor or possibly a rough surface indicative of a non-domestic function. The un-mortared foundations of an east-west aligned wall were present below the junction between the tiles and the stone surface.

Excavations in the kitchen were seen as the best opportunity to recovered stratified environmental remains from any underfloor drains. The trench revealed the remnants of a mortar floor, which overlay a large brick- lined drain, capped with slate. This entered the kitchen on the south-eastern side before changing direction to run north towards the Great Hall.

One of the monumental fireplaces is still visible on the western wall, below a large standing chimney. A second fireplace of similar dimensions was present at the southern end of the building and excavation exposed the remains of the hearth, composed of bricks and quarry tiles, scorched through use and lying beneath a thick charcoal rich layer. The hearth was set on top of a thick brick plinth, which may also have provided stability for the chimney arch: a similar feature, constructed from stone, was present beneath the western chimney. 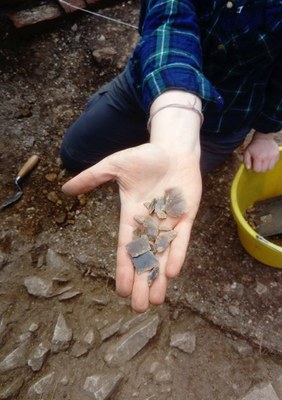 Much of the southern frontage of Bradgate House has been altered since its initial construction during the early 1500s and it is argued that some of the upstanding structures are actually 20th-century fabrications, including the southern gable end of the west wing and south-western tower that collapsed in the storm of 1896. Trench 12 aimed to investigate the validity of the validity of the reconstructed wall lines in relation to the original buildings within this heavily modified part of the site in this location. Excavations revealed a brick outbuilding that would have originally have extended to the south, before the construction of the boundary wall in the 20th century, which was intended to contain the ruins, providing a barrier to access.

There was a fireplace in the south-western corner of the structure, with a hearth constructed of bricks. Between the Tudor wall of Bradgate House and the brewery structure there was an apparent brick pavement following the line of the building and terminating abruptly at a structure described as a brewery vat. Exploration of this structure showed that it had no base or lining and only a thin sequence of deposits. Although it could not therefore have held liquid, its function is still mysterious. A surprise discovery below the brewery building, laying atop the natural, was an in-situ scatter of late Mesolithic flints.

The small structure located against the eastern side of the eastern wing has been variously interpreted as a possible wardrobe, garderobe or porch. Our investigations indicated that the existing structure bore little resemblance to what was beneath the ground. Earlier wall lines were present beneath the modern reconstruction, but these were only partially exposed. The main feature of the trench was the presence of interlinked brick-lined drains, from which a large number of objects including numerous copper alloy pins, pottery and animal bones, were recovered. 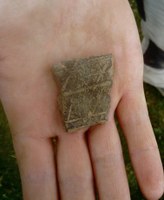 The 2017 season also included trial trenching of the enclosure which was surveyed in 2016. The nature of the natural subsoil made features in this area extremely hard to distinguish. Excavations included a couple of sections through the substantial enclosure ditch, which proved to be c. 2.3m wide and 0.75m deep. It contained several fills including a lower one with charcoal fragments, one of which has been dated to the mid Iron Age.

The remains of a ring gully were noted within the enclosure. Dating evidence was very sparse, however a sherd of Iron Age pottery was recovered, which potentially adds yet another archaeological period to the multitude of known archaeology within Bradgate Park.