Where did we dig? 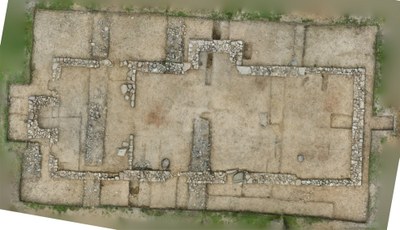 The medieval moated site is a scheduled monument, and Historic England kindly granted us permission to undertake a series of targeted excavations to understand its date and purpose. Received wisdom is that the moated site is the location of the ‘keeper’s lodge’ during the medieval period when the extent of the deer park was much smaller than it is now. Geophysical survey in 2014 revealed the presence of a large stone building in the centre of the platform, together with some curious low resistance features (including a possible well) and a wall. These features were investigated in 2015, alongside the bank and ditch and the interior of the platform. The results of the Season 1 excavations (which also encompassed areas within and outside Bradgate House) are described more fully here. In brief, these excavations revealed a single-storey, cruck (timber)-framed building with a stone foundation, timber or cob-built walls and a roof made of local slates occupied in the 13th and 14th century.

We revealed the full (c.21m by 8m) plan and determined the construction methods: the cruck-framed structure was confirmed through the pairs of pad-stones, or remnants thereof, found at regular intervals, which would have supported the large curved timber posts of the frame. The entrance was eventually identified as occupying the northern wall of the western ‘service’ bay at the site of a 1.6m gap in the stonework and a thin layer of stones representing what once was the threshold. An external fireplace was uncovered in the western bay at the site of a suspicious mound noted during the previous season at a central position on the western wall. The internal size (1.5 by 1.5m) and heat-cracked, reddened, progressively curving stones are consistent with use as an oven. Although the phasing of the building’s construction is yet to be entirely confirmed, the small quantity of pottery recovered from the occupation layer, preliminary dated to the 13th-14th century provides a dated occupation period, and as a base-cruck construction is usually undertaken as a single phase, it is likely that the chimneys were inserted later to an earlier construction. The most abundant finds from the interior of the moated site building  were hundreds of variously sized and shaped roof slates from Groby quarries and fragments of green glazed ceramic ridge tile of Chilvers Coton ware (Nuneaton) that would have capped the apex of the roof.

The moated platform itself was investigated, with a trench opened north of the building, spanning the moat, in the hope of uncovering rubbish pits and dating the moat construction. Although the trench was not completely successful in providing midden evidence, the use of auger holes through the current causeway produced natural subsoils, indicating that it was contemporary with the moat construction.

The objective of test-pit excavations was to look for further evidence for the use of the Park by Upper Palaeolithic hunters 15,000 years ago, revealed through excavations earlier in 2015 at the Little Matlock area of the park. However, Test Pit 14, opened at the site of a rocky outcrop to the West of Bradgate House due to its potential as a site of Upper Palaeolithic activity, instead revealed a so far undocumented structure with narrow stone walls and a laid stone floor, with fragments of slate suggesting a roofed building in urgent need of further investigation!

Excavations at Bradgate House were otherwise limited to re-examination of deposits associated with food debris, with the aim of sampling plant and animal to gain further insight into the lives of Bradgate House's inhabitants in the past. Accordingly, Test Pit 8 from Season 1, that had contained food debris deposits, was extended and promoted to Trench 11. Unfortunately it was found that at some point in the mid 20th century, the area had been cut through by an "L" shaped trench, possibly in relation to the military training that had taken place in the Park during the Second World War, and extensions made to avoid the truncation contained very thin midden deposits.

Test pit 13, 30m north north west of Trench 11, however, contained a 0.7m thick layer of brick overburden directly overlaying a 0.35m soil deposit containing a very substantial bone and pottery assemblage associated with domestic dumping. This exciting find prompted excavators to extend the pit to a 2m by 2m trench to be excavated in quadrants so as to identify a top layer of largely 19th=century pottery with a much earlier 16th century deposit beneath, representing many generations of Bradgate House occupants and providing what will be invaluable data on their living habits. 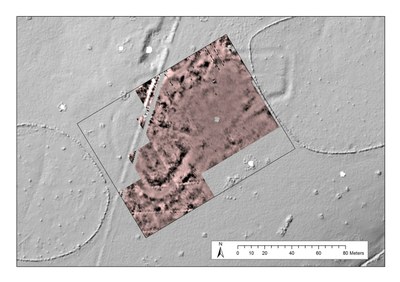 A resistivity survey was conducted of an enclosure first revealed in the 2014 LiDAR survey. The feature revealed comprises of a single (150m by 50m) irregularly-shaped enclosure with an entrance on the south side. While the visibility of the ditch in the LiDAR survey might suggest a medieval or post-medieval date, the broad form of the enclosure is more consistent with late prehistoric activity. The survey revealed two sub-enclosed ‘arms’ and some areas of a surviving internal and external bank. Within the south-west sub-enclosure, a high-resistance circular feature with a south-east entranceway may have also been detected, as was a rectangular structure bisecting the north-west side of the enclosure. 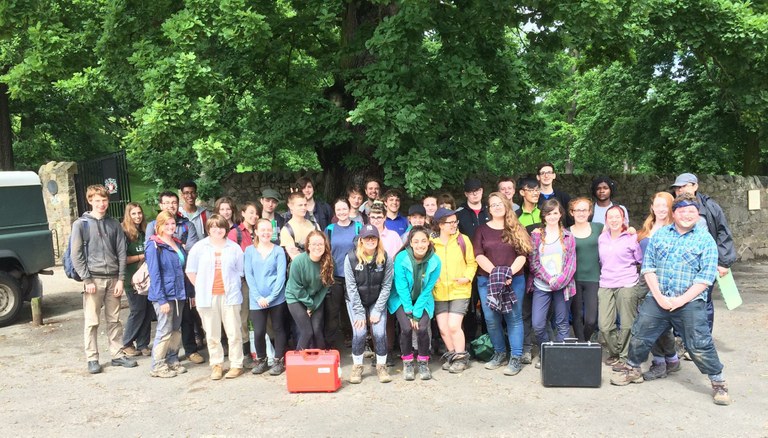