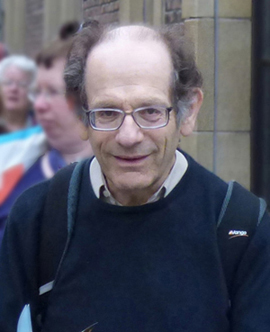 It is with great sadness that we pay tribute to Michael Sackin, former member of the Department of Microbiology and conductor of the Leicester Sinfonia Orchestra.

Michael passed away on Monday 12 August, three weeks after his 77th birthday, after a long and often unconventional nine-year battle with lymphatic cancer.

He retired as an academic in 2007 after more than 40 years of service to the University. He first began working at the University of Leicester in October 1964, working on computer software for Numerical Taxonomy in the MRC Microbial Systematics Unit set up by Peter Sneath, which later became the Department of Microbiology.

Michael was a keen amateur musician and enjoyed playing chamber music on the violin and viola. He performed with several local orchestras, including the Knighton Chamber and Leicester Symphony Orchestras and played an active part in the musical life of the University of Leicester from 1964 onward.

The University of Leicester Sinfonia was founded in 1970 by David Cursons as Leicester University Baroque Ensemble. Since 1971 it was conducted or directed by Michael Sackin, normally giving three concerts a year, including regular collaborations with Hinckley Choral Union.

Michael’s last public performance was in April at the United Reformed Church in Hinckley, playing one of the solo violins in Corelli's Concerto Grosso Op. 6 no. 7 and conducting a fine performance of Beethoven's Coriolan Overture.

Michael also campaigned on environmental and social issues, frequently contributing to the letters page of the Leicester Mercury. He will be greatly missed by his friends and colleagues.

In tribute to Michael and his impact on the life and community of the University we lowered the flag on the Fielding Johnson Building from Wednesday 21–Friday 23 August.