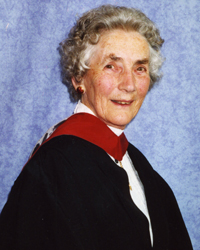 It is with great sadness we have learned of the death of a much-loved and dedicated friend of the University, Mrs Jean Humphreys.

As the wife of Professor Arthur Humphreys, one of the University’s early and most influential professors, Jean first arrived at the University more than 70 years ago. Her passion for the University and the city of Leicester began at that point, and lasted until her final years.

In 2008, in recognition of her inestimable dedication to the institution, she was awarded the University’s highest honour, the rank of Distinguished Honorary Fellow – which can only be held by 24 people at any one time.

When she received her Distinguished Honorary Fellowship, then Vice-Chancellor Professor Bob Burgess said: “People are at the very heart of the success of this University and they take many roles as teachers, researchers, administrators, secretaries and technicians but there is also another role that is vitally important to our success – that of the supporter of the University. Many people in this hall support the University on many occasions but there is one person who many would agree is a leading supporter of the University of Leicester. It is Jean Humphreys. If you go to a University public lecture she will be there, inaugural lectures you will see her there, concerts, special occasions and degree ceremonies will find Jean Humphreys cheering us on. My recommendation is that every University needs a Jean Humphreys.”

Born at Drumadoon Farm on the Isle of Arran, Jean graduated in 1945 with an MA, gaining a Teachers’ Diploma in 1946 and taught English. She moved to Leicester in 1947 and was married to Arthur Humphreys, a greatly admired and influential Professor of English at the University of Leicester.

Former Chair of Council Dr Bridget Towle said: “With the death of Jean Humphreys we have lost a great link to the early days of the history of the University. Jean arrived in Leicester in 1947, aged 23, recently married to Arthur the newly appointed first Professor of English. At that time Frederick Attenborough was the Principal, there were a few hundred students and a small staff group, but expansion was swiftly occurring. Jean’s role in this fast growing community was to encourage and support, which she did with great enthusiasm remembering that every student and member of staff was important. She remained in Leicester for the rest of her life, caring about the progress of the University and involved with its members.

“I have fond memories of meeting Jean in my former role as Chair of Council. I valued her insight and her wise counsel. Her knowledge and experience of the University was immense and she had touched the lives of so many people past and present. She was at heart a people person full of wonderful memories of the times and lives of key personalities in Leicester’s history. I will miss her effervescent personality and her incredible positivity.  I offer my sincere condolences to her loved ones.”

Former Vice-Chancellor Professor Bob Burgess said: “Jean Humphreys was a great supporter of new staff who received warm welcoming letters from her. I remember very clearly Jean writing to me and offering much encouragement when I was appointed as Vice-Chancellor.

“Her death marks the end of  an era and a long association with the University. She was often referred to by many who knew her as “a lovely lady". Jean was a great friend to the University staff and students and will be remembered with great affection.”

Former Vice-Chancellor Dr Ken Edwards said: “Janet and I are very sorry to hear that Jean Humphreys has died. She was the first person to write welcoming us to Leicester on my appointment as Vice-Chancellor and she and her husband, Arthur, were among the first to entertain us in their home.  Jean continued to be a great friend and support to us throughout my time in Leicester, as I know she has been to many VCs.

“Her involvement in activities within the University was constant and widespread - she rarely missed a degree day and she was an enthusiastic supporter of musical programmes. Above all she was a great friend and wise counsellor to many individuals.  She was much loved.”

Professor Joanne Shattock, from The Victorian Studies Centre, said: “Jean Humphreys embodied the spirit and the ethos of the University of Leicester in its early days when it was a small and intimate University College and brought those values to a much larger and diverse 21st century institution. Warm, friendly and hospitable, she embraced her role as the wife of the first Professor of English when Arthur Humphreys was appointed in 1947. Still in her early 20s when she arrived in Leicester, she and Arthur established a wide network of friends across the University and beyond.  She got to know the early generation of students and kept in touch with some of them up to the present day.  She did the same with members of the English department and their families, welcoming newcomers long after Arthur Humphreys retired in 1976.

“After Arthur’s death in 1988 Jean continued to be an active supporter and ambassador for the University.  She used her contacts to strengthen the links between the academic community and the city through her role in the Leicester Lit and Phil, of which she became President in 2010.  She was an enthusiastic attender of inaugural lectures, degree ceremonies and departmental events and latterly she was generous in bequests to the University and to the English department. Jean was a true University citizen, a perfect example of how a University should engage with its wider community to the mutual benefit of both.”

The University would like to express our sincere condolences to Jean’s family. Our thoughts are with them at this difficult time.