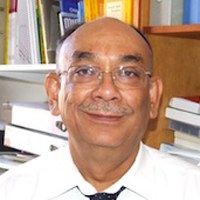 Professor Sabyasachi Bhaumik passed away on Saturday 9 November 2019 following a major heart attack. He held an honorary chair in the Department of Health Sciences for many years and lead a highly productive and sustained clinical academic collaboration between the department and the Leicestershire Partnership Trust in Learning Disability Psychiatry.

Dr Ken Courtenay, Chair of the Psychiatry of Intellectual Disability faculty at the Royal College of Psychiatrists (RCPsych), said: "Sab was a towering figure in our speciality who contributed so much to knowledge in intellectual disability, service development, clinical care, research and very importantly, supporting and developing generations of psychiatrists. He was Chair of the Faculty from 2006 to 2010 and held other important roles in the College. As Chair of the Diaspora Group he supported psychiatrists in the UK and contributed to mental health services in Low and Middle Income countries. Sab will be missed by so many of us but especially by his colleagues in Leicester."

Dr Asit Biswas, Vice-Chair of the Psychiatry of Intellectual Disability faculty at the RCPsych said: "Sab had touched the lives of so many through his relentless work, his compassion and kindness to his patients and his colleagues and always had time for people who needed his advice and mentorship."

Professor Terry Brugha, Professor of Psychiatry in the Department of Health Sciences, said: "Sab will be sadly missed by his many colleagues. He showed exceptional generosity and devotion to all who encountered him."