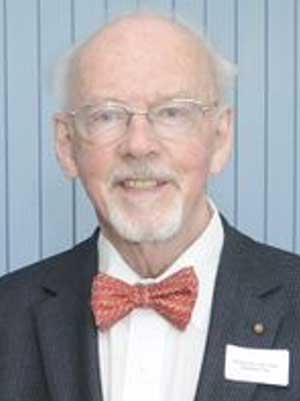 The University has received the sad news of the death of Professor Sir Hans Kornberg, FRS.

Sir Hans was appointed in 1960 as Foundation Professor and Head of the newly formed Department of Biochemistry. He remained in this role for 15 years and was instrumental in building the University’s reputation for research and teaching in biochemistry that continues today in the Department of Molecular and Cell Biology. The research contributions of Sir Hans, many made during his time at Leicester, were recognised by many awards, including the Colworth Medal of the Biochemical Society, the Otto Warburg Medal of the German Biochemical Society and Fellowship of the Royal Society (in 1965).

"Sir Hans Kornberg will long be remembered as the foundation Professor of Biochemistry in this University. He gathered round himself a distinguished band of scholars who formed a closely linked unit; it was rare at lunchtime not to see them marching across the campus to lunch, Hans Kornberg in the middle, and then returning to their laboratories equally en masse.

"I recall walking across Victoria Park with him at a time when there was a ‘brain-drain’ from science departments in this country to America and virtually the entire Biochemistry Department of Sheffield University had crossed the Atlantic; I asked him whether he had been similarly tempted and he replied: ‘No, as my old teacher, Hans Krebs, always said: “Vee Britisch musht shtick together.”' He was always extremely grateful to this country for having given him refuge and a career at a time when many of his co-religionists in Germany were subjected to persecution and murder.

"The University owes a great debt to the part he played in building up not merely the Department of Biochemistry but the eventual School of Biological Sciences and of course the School of Medicine."

"Hans Kornberg and I arrived in Leicester in 1960, just a few months apart. With both of us initially staying in Beaumont Hall, I had an early opportunity to get to know – and respect – a lively and friendly colleague, apparently also coming from within a few miles of Leeds.

"Although very much his junior, it emerged that Hans and I had been appointed with the similar aim of establishing a new area of science at the University, specifically the creation of a Department of Biochemistry and a space research group to study X-ray emission from the Sun and beyond. Both started out with limited facilities, the development of the Adrian Building being an early challenge for Professor Kornberg. The situation was rather better for Physics, with a new building due to open within a couple of years of my arrival providing an opportunity to vacate the ground floor of Fielding Johnson (and allowing the university administration room to expand!).

"With the subsequent rapid growth of both Life Sciences and Space Sciences in Leicester, there were several occasions over the following years when I found it valuable to share with Hans our differing experience in dealing with external bodies such as the SRC and Royal Society.

"Sixty years on, the high international standing of both Life and Space Science at Leicester gives added warmth to those early memories of my interactions with Sir Hans Kornberg."