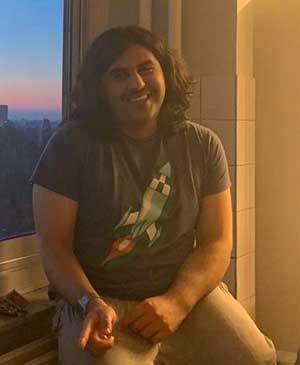 The University has learned with sadness of the death of one of our undergraduate students, Fahad Sadah.

Fahad joined the University family in 2017, studying on the MComp in Computer Science. He passed away last year during the third year of his studies, which he was spending abroad.

Richard Craggs, Director of Teaching and Learning in the School of Informatics, writes:

“Fahad always showed real dedication to his studies and was especially enthusiastic about software projects, producing some really imaginative and successful work. He contributed in so many other ways to the University helping on visit days when he would talk enthusiastically to potential future students about our School and the University. Always keen to help others, he was active in running the Students’ Union’s Nightline service.

“Within the School, Fahad was an integral part of the DriverLeics team, researching driverless vehicles, which has been the centrepiece of so many events from University Open Days to the Royal Society exhibition. The code that he wrote remains part of the control system for our driverless car.

“Everyone here was looking forward to welcoming Fahad back to our school next year. We are very sad that he won’t be joining us.”

A website has been set up for anyone who would like to make a donation in Fahad’s memory to the charity CALM (Campaign Against Living Miserably).