The University as a military hospital during the Great War 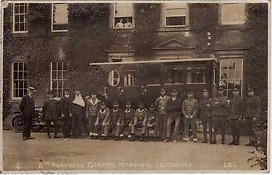 Among the many books and documents in the University’s David Wilson Library is a volume entitled 'Roll of Honour of the Men of Leicester and Leicestershire in the Great War, 1914-1919', which commemorates the many servicemen from the city and county who were killed during the First World War.

The University of Leicester itself was founded as a memorial to the local men who died in the First World War, a fact reflected in the institution’s motto ‘ut vitam habeant’ which means ‘so that they may have life’. University College Leicester (as it was then) began as an idea that predated the Great War and eventually came to fruition when the College was founded in 1921. In the intervening years, the future campus performed an important role as a military hospital.

The University’s main administration building, now known as the Fielding Johnson Building, had been constructed in 1837 as the Leicestershire and Rutland County Asylum, but became empty in 1908 after patients and staff transferred to a new asylum in Narborough which had opened the previous year. In 1911, the empty County Asylum building was identified by Medical Officers from the Territorial Force or TF (predecessor to the TA) as a suitable location for a military hospital, should the need arise. 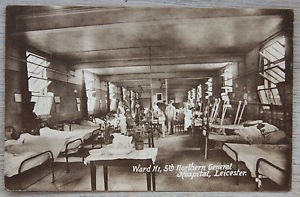 During the course of the war, the 5th Northern General expanded from this base hospital building to become a local network of more than 60 locations including North Evington War Hospital, Knighton House Hospital, Gilcross Hospital and the Leicester Royal Infirmary. Admiral Beatty, a naval hero for his role in the Battle of Jutland, donated his Leicestershire home Brooksby Hall as part of the 5th Northern General, staffed by nurses from the Voluntary Aid Detachment.

In total, there were beds in Leicestershire for 111 officers and 2,487 other ranks, through which passed more than 95,000 casualties. Of these men, 514 deaths were recorded, 286 of whom are buried across from the University in Welford Road Cemetery. The Commanding Officer of the hospital in 1917 was Lt. Col. Louis N Harrison.

One of the most important figures at the 5th Northern General was Dr Alfred Ernest Payne, a Leicester-born physician whose amateur interest in photography led to an offer from the hospital to take up a position in ‘skiagraphy’ – as x-ray photography was then known. Payne went on to a distinguished career in radiography, leading departments at both the Leicester Royal Infirmary and Loughborough Hospital, as well as serving on the committees of the British Institute of Radiology and British Association of Radiologists and as President of the Leicester Medical Association.

Another notable member of staff, also involved with radiography, was Dr E Lewis Lilley who had, until the outbreak of war, been in charge of Leicester and Leicestershire Maternity Hospital. After the war, Dr Lilley served on the Council of University College Leicester and was responsible for founding the Music Department including the appointment, as part-time lecturer, of a promising young organist from Melton Mowbray named Malcolm Sargent.

The 5th Northern General Hospital finally vacated Leicester in 1919. In March of that year, Dr Astley Clarke, who was serving as President of the Leicester Literary and Philosophical Society, visited local businessman Thomas Fielding Johnson to outline a plan for raising enough money to purchase the hospital building and grounds for educational purposes. To Clarke’s amazement, Fielding Johnson admitted that he had secretly already bought it – with the intention of gifting it to the Council for exactly the same purpose. And so in 1921 the University College opened with one eye on the past, as a memorial to the young men of Leicestershire who never came home, and the other on the future, equipping a new generation with the skills and knowledge to change their own – and other people’s – lives.

Today a flag flies above the 19th century building named after that first benefactor, Thomas Fielding Johnson, with the University of Leicester’s coat of arms: a red shield bearing two white flowers, a golden horse-shoe and an open book reading ‘ut vitam habeant’ – that they shall have life.

Fifth year medical student Liberty Breeze talks with Simon Dixon and Robin Jenkins about the site's use as a military hospital and how it became University College Leicester.

Listen to the podcast
Back to top