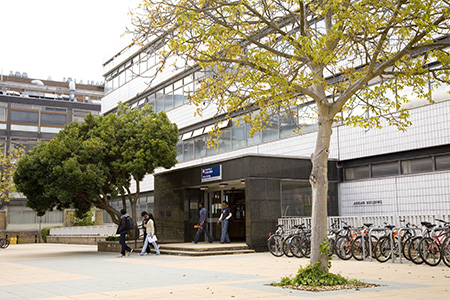 Designed in 1967 by Courtauld Technical Services, the Adrian Building was formally opened the following year by Lord Adrian (see below). The bridge across University Road was added in the late 1970s after the construction of the Maurice Shock Medical Sciences Building. An extensive interior refurbishment between 2004 and 2006 amalgamated the original small laboratories into larger labs.

While no-one could reasonably claim that the Adrian Building has any great architectural merit, its significance rests on what happened here one chilly September morning in 1984…

Few scientific breakthroughs can be as accurately dated as Alec Jeffreys’ discovery of genetic fingerprinting, which occurred in a small lab in the Adrian Building on 10 September 1984 – at five past nine in the morning.

Jeffreys (not yet a Professor or Sir) was researching inherited genetic variation, studying the DNA of his assistant and her parents. The ‘eureka moment’ was the realisation that every person’s DNA was as unique and identifiable as a fingerprint – and the potential this offered for legal medicine and criminal investigation.

In 1985 this new technique was used in an immigration case and a paternity case, but it first hit the headlines the following year when Alec Jeffreys was approached to help with a baffling double murder case in Leicestershire. DNA testing of blood samples from local men led to the arrest and conviction of Colin Pitchfork for the rape and murder of two schoolgirls, Lynda Mann and Dawn Ashworth.

After reading biochemistry and genetics at Oxford and a postdoctoral fellowship in Amsterdam, Alec Jeffreys came to Leicester in 1977, initially as a temporary lecturer. He was given a small lab in the Adrian building and an assistant and largely left to his own devices. The following year he made his first breakthrough, detecting variations in human DNA.

After the Colin Pitchfork case, he worked to refine and develop the techniques of genetic fingerprinting which was increasingly in demand by law agencies across the globe. Among his notable other projects were identifying the remains of Nazi war criminal Josef Mengele and investigating the genetic mutation consequences of the Chernobyl Disaster. He was Knighted in 1994 and made a Companion of Honour in 2017. 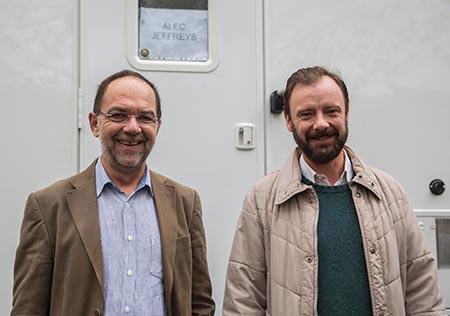 In 2015 Sir Alec was portrayed by John Simm in Code of a Killer, a dramatisation of the Colin Pitchfork case. Scenes were filmed in front of the Adrian Building and in other locations on campus. (Watch out for the scene when David Threlfall (playing DCS Baker) greets John Simm with the words “Dr Jeffreys?” - the extra walking past is the real Alec Jeffreys.)

The Adrian Building is named in honour of Edgar Adrian (1889-1977), a pioneering physiologist whose work on the function of neurones earned him a Nobel Prize in 1932. He served as President of University College, Leicester from 1955 to 1957 and then became the University of Leicester's first Chancellor from 1957 until 1971.