What we have known since the 1960s as the Fielding Johnson Building was originally the Leicestershire County Lunatic Asylum: the first public provision of care for pauper ‘lunatics’ (an all-encompassing term used at the time for many mentally and physically debilitating illnesses). It became the Leicestershire and Rutland County Asylum when Rutland joined the institution after an 1845 Act requiring all counties to make such provision. 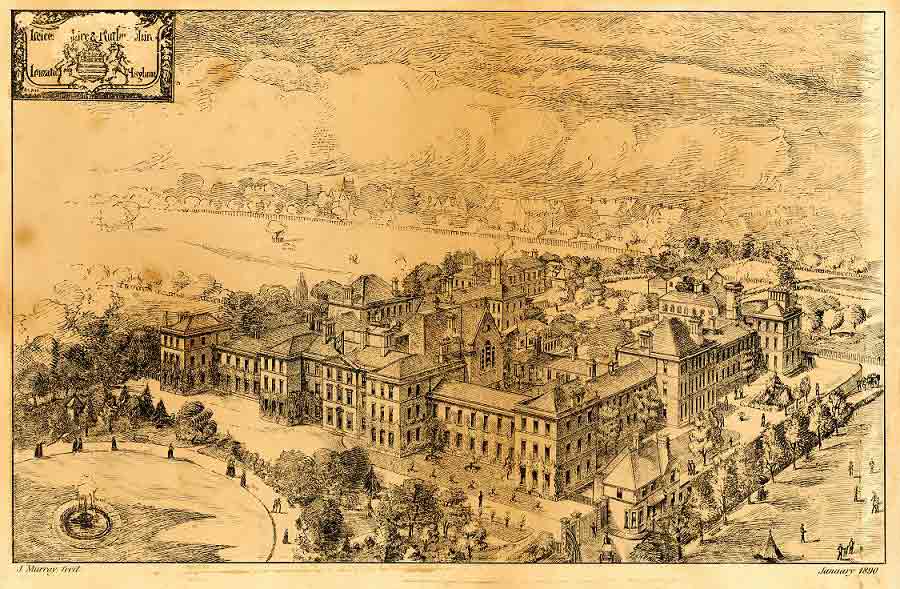 1890 drawing of the Asylum by James Murray

Asylums for the mentally ill have existed in Britain since at least 1247 (when Bethlem originated in London), but what is often evoked by the word ‘asylum’ in the popular imagination are large purpose-built 19th century institutions that are now superseded. In Leicester, a small charity asylum had been established at the Royal Infirmary in 1784 and there were a number of privately-run ‘madhouses’ around the town. Paupers, however, were reliant on charity or confined to workhouses.

In 1832-34, the Subscribers of the existing Royal Infirmary asylum proposed a new County Lunatic Asylum, following a recent Act of Parliament (1828). They looked to the pioneering Hanwell asylum (opened 1832) and sought to introduce many of its methods, including therapeutic occupation, non-restraint and access to garden landscapes at an entirely new institution.

It was purpose-built in 1837 to a design by William Parsons (who also designed St George’s Church and Leicester Prison) and was situated in what was then called Occupation Road (later Victoria Road, now University Road). It operated for 70 years, expanding over time to increase capacity. The Asylum served a dual purpose: as well as admitting the pauper patients it could take private patients, those who could pay for treatment and care.

Most scholarship suggests that these large asylums were misunderstood institutions. Misconceptions about them presented society with a false idea of what they existed for, how they treated people, and how patients coped with their illness. Although, nationally, instances of terrible mistreatment are evidenced, so too are progressive and sympathetic treatments and effective rehabilitation programs. The gradual reform of practice inside these institutions changed medical and public attitudes to mental health.

The Leicestershire County Lunatic Asylum opened 10 May 1837 with 12 patients' admissions, and had the capacity for 104 patients. Women were accommodated on the east side, men on the west. The first Medical Superintendent was Mr Prosser. The Asylum management proudly advertised that it offered “safety, comfort and relief” to its inhabitants. (Leicester Herald, Saturday 13 May 1837, p.8, ‘Leicester New Lunatic Asylum.’) In 1849, they stressed that “…no effort is left untried to cheer the melancholy, and soothe the excited, the great object being to make this Asylum a House of Cure, and not a House of Detention.” (Leicestershire and Rutland Lunatic Asylum, (1849), Rules for the General Management of the Institution, p.19, accessible online via the Wellcome Library)

The work of Diane Lockley (in The House of Cure, 2011 and Such Tender Years, 2013) has shown that approximately 7,000 patients were admitted during its lifetime on this site, and around 50% were restored to health well enough to return to their former lives and occupations. The original records of the Asylum are held by the Record Office for Leicestershire, Leicester and Rutland.  When the building was deemed unfit for purpose, a new asylum was built at Carlton Hayes, Narborough. The patients had all been transferred by 1908. The building then stood empty until the First World War, when it was occupied by the 5th Northern General Military Hospital.

What survives from the Asylum period are the following buildings: