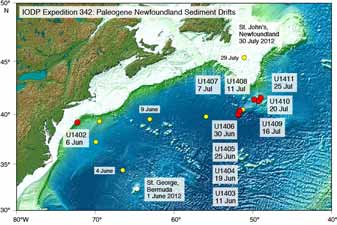 In June 2012, the JOIDES Resolution set sail to the North Atlantic Ocean south of Newfoundland, not far from where the RMS Titanic sank 100 years ago. The aim of the expedition was to study paleoclimate events like the onset and development of Cenozoic glaciations and hyperthermals recorded in drift sediments of Paleogene age along depth transects off Newfoundland.

The main objectives were:

Prior to the start of Expedition 342, two operational days were spent drilling Site U1402 (the location of site 1073, ODP leg 174A) offshore New Jersey to test the Motion Decoupled Hydraulic Delivery System (MDHDS). The second of two deployments of this system successfully acquired in situ pressure measurements.