In 2004 the Human Tissue Act finally repealed the Anatomy Act of 1832 (the latter was passed to help meet a shortfall in bodies for medical training by the Victorians). Today nobody can be dissected without the written consent of their living relatives or by a solicitor preparing a living will for someone who wishes to donate their body to medical science. Human cadavers cannot be used for anatomical education, transplant surgery or scientific research without a post-mortem schedule overseen by the Human Tissue Authority. This legal correction of medical ethics followed a public outcry when Sir Liam Donaldson, (chief medical officer) announced in February 2001 that 105,000 organs, body parts and associated human material had been retained in 210 English NHS Trusts and medical schools. Of those 210, around 25 leading institutions accounted for nearly 90 per cent of the body parts retained. Donaldson found that over 16,000 organs had been kept illegally. These official disclosures raised important historical and moral questions. Not least, how is it that doctors assumed the legal right to simply do what they wanted with the dead? The sensitive question of fully informed consent, disputed bodies, and medical research, after World War II, has been the focus of this large Wellcome Trust Programme Grant.

In a discipline-redefining research strand, Elizabeth T. Hurren has mapped the post-mortem journeys of bodies, body-parts, organs, and brains, inside the secretive culture of modern British medical research after World War Two as the bodies of the deceased were harvested as bio-commons. Often the human stories behind these bodies were dissected, discarded, or destroyed in death. Hidden Histories of the Dead recovers human faces and supply-lines in the archives that medical science neglected to acknowledge. It investigates the medical ethics of organ donation, the legal ambiguities of a lack of fully-informed consent and the shifting boundaries of life and re-defining of medical death in a biotechnological era. Hurren reveals the implicit, explicit and missed body disputes that took second-place to the economics of the national and international commodification of human material in global medical sciences of the Genome era.

In 2020 the project has thus produced a discipline-redefining quantitative and qualitative novel study of British medical research cultures through analysis of the harvesting and recycling of human material, including its use in tissue culture and pathology labs, transplantation surgery facilities, brain banks, and the dissection teaching spaces between 1945 and 2000.

An anonymous peer review for Cambridge University Press has described it as: 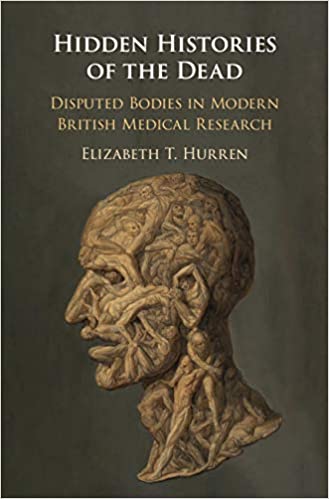 ‘This is an exceptional book. Incredibly well researched, exhaustive and compelling, it brings history to bear on the present. The book is the third in a series of monographs by the author to address the history of the corpse and anatomy. I’m cautious of overstating claims but this is an important book. First, it reclaims the history of human remains to reinstate the individual into narratives of tissue and medical research. In doing so, it engages (powerfully) with the shifting ethics of anatomical ‘ownership’, identity and use. Second, it brings to the fore the complex history and status of the corpse and the contested claims to ownership regarding the corpse. As Hurren demonstrates, these issues are as pressing now as they were in the last three hundred years of so. The book makes a significant contribution to the history of medicine, not least because the ethics of medicine under discussion here remain so contested. It should also be required reading for medical students. But the book also has considerable significance for social history. Hurren draws on Thompson at the outset to set out the idea of ‘hidden histories’. As she says, social history has tended to end with the funeral. Hurren extends history ‘from below’ by examining human stories after death. In many ways, this is history at the margins at its best – the dead have metaphorically (as well as literally) been powerless, voiceless and without representation. The book shows all too well the consequences of this lack of representation.’