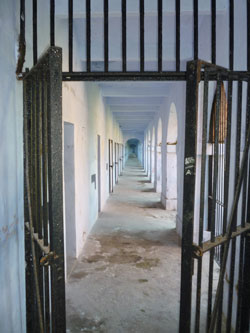 ‘The Carceral Archipelago’ has been funded by the European Research Council (2013-18), under the direction of principal investigator Professor Clare Anderson. The project analyses the relationships and circulations between and across convict transportation, penal colonies and labour, migration, coercion and confinement. Cellular Jail AndamansIts geographical scope is wide, and it incorporates all the global powers engaged in transportation for the purpose of expansion and colonization - Europe, Russia, Latin America, China, Japan. Its chronology stretches from Portugal’s first use of convicts in North Africa in 1415 to the dissolution of Stalin’s gulags in 1960. The project is using an innovative theoretical base to shift convict transportation out of the history of crime and punishment and into new questions that are being raised within global and postcolonial history, about the role of coercion and confinement within global expansion and divergence.

The project team is undertaking case study research on convict flows, penal colonies, and on the mobility of ideas and practices around transportation and other modes of confinement all over the world, and over this long period. The research team is working on the Caribbean, West Africa, Gibraltar, Russia, Portugal, Latin America, Japan, Australia and the Indian Ocean. We aim to redefine what we mean by ‘transportation,’ to explore penal colonies as engines of global change, to connect convict transportation to enslavement, indenture and other forms of coerced labour and migration, and to define the long-term impacts of penal colonies on economy, society and identity.

The team provided a theoretical, empirical and analytical approach to the project.

More information on the project

Find out more about the people involved in this project.

For more information
Back to top