It was one dark night in November at Queens Hospital, Burton and I received a message from a fellow BME Network member at Warwick. They wanted to bounce the idea of holding a Midlands conference to tackle the shocking stats for ethnic minority medical students and never-ending attainment gap…

3 months later, we have 2 confirmed sponsorships, 6 regional medical schools declaring their pledge to the MREM Network and over 100 people signed up to our inaugural Midlands Racial Equality in Medicine Conference (held in February 2022). Being part of the organisation of this has been insightful, nerve wracking and, at the same time, incredibly exciting! 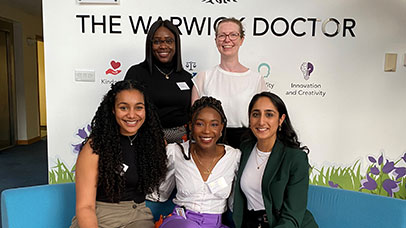 Not only has this given me the opportunity to work with medical students outside of Leicester Medical School, but I have been able to learn so much from this exceptional team of students. From every weekly meeting I have been left feeling inspired and hopeful for change. Facing the reality of disparity that still exists in Medicine can be difficult to consistently swallow, but working together collaboratively has left only optimistic feelings.

Every meeting, every hour creating Canva posts or sending emails, all eventually adds up to something promising. With only a few days left until the Conference, I’m not sure how it all came together so effortlessly!

My biggest lesson – don’t be intimated by big ideas! Embrace them!