If at first you don’t succeed, (please) try, try again 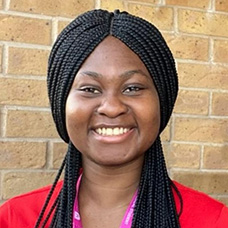 Names can provide information about people even prior to meeting them. In medicine, we use names as a patient identifier, to initiate interaction and to ensure we prevent errors. However, it seems people don't realise that treating people's names solely as a patient safety checklist is an error in itself. I say this because names actually provide an opportunity to build a rapport with patients which makes it easier to provide collaborative patient centred care. Failing to acknowledge people's names and imposing an alternative name are things which I have observed within the healthcare setting which can make patients (and colleagues) feel undermined.

I understand people can be fearful about causing offense by mispronouncing people's names. However, I think people should feel reassured that people with names from minority ethnic groups acknowledge the fact that our ethnic differences make certain pronunciations more difficult and are willing to tell you how to pronounce their name correctly. I have pondered about this topic for a while due to copious encounters I’ve had involving my name or names of other people usually from ethnic minority backgrounds  but was apprehensive about speaking about it so I don’t come across as being ‘over the top’ or doing too much. However, I hope expressing my views can help to improve understanding and foster better relationships for patients and healthcare students/staff.

From a personal perspective, I have been very pleased when people attempt to pronounce my name (even when it has been done incorrectly). Having been called Lola from a young age, I was content with the comfort of being called a name that everyone found easy to pronounce. Thus, I introduced myself as Lola in most places for a number of years (introducing myself by my actual name to people who I knew were able to pronounce it or were more likely to attempt to pronounce it). However, over time I began to call myself Lolade in more places. A contributory factor to this was due to the fact that I enjoyed watching sports and noticed that when Nigerian athletes/sports people from minority ethnic groups were representing Great Britain or England in a sport, people referred to them by their names in conversation. Thus, I pondered whether people really had difficulty pronouncing my name or where choosing not to pronounce it. I would like to clarify that I have never expected anyone who isn’t Nigerian to pronounce my name with a Nigerian accent – however, I was hoping people would attempt a phonetic pronunciation of my name. I believe acknowledging the names of people from all ethnic groups is pivotal because being called by our names is not a ‘privilege’ we have to earn.

Consequently, I have been introducing myself as Ololade in more spaces, expressing that I use this interchangeably with Lolade which is a common shorter way of saying my name highlighting that I would like to be addressed as either Lolade or Ololade. Notwithstanding, I have reflected on the fact that despite this, there are people who would still find my name challenging. This lead me to introducing myself as Ololade but giving people the option to call me Ola (rather than Lola) which better depicts the meaning of my name. Furthermore, even when introducing myself as Ola, people have an idea about where I am from, usually asking me if I am Nigerian and guessing which part of Nigeria I am from, what language I speak or in the case of one of my consultants, recommend a funny video to watch by a Nigerian YouTuber. All these experiences have helped to build a rapport with them and benefitted me too, enabling me to also learn more about their culture/other cultures.

My thoughts on this topic partly stems from one of my pre-medical school work experience placements where the consultant I was shadowing asked me where some people were from based on their names. I did not anticipate this as I was expecting him to test me on my scientific knowledge to determine if I would be a good doctor. However, he highlighted that medicine was beyond the science. It was about the holistic approach which most people in healthcare refer to but don't always incorporate into practice. Through knowledge of where they were from, he was able to engage in more personal conversation with them whilst maintaining professional boundaries. This memorable experience from about 7 years ago emphasised the fact that the social element of the biopsychosocial model is paramount and should not be neglected. Cultural awareness is one of the valuable lessons which we must learn for us to deliver truly holistic care. Therefore, when addressing people from minority ethnic backgrounds whose name may not be familiar to us, I would like us to adopt a motto I grew up with which was “if at first you don’t succeed, try, try again”.