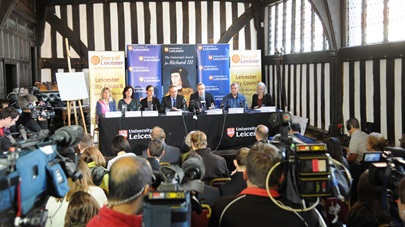 A film depicting the Richard III discovery, The Lost King, was released in autumn 2022.

The University offered to help the film-makers with vital information about the project, which was declined. After viewing the film, which the University feels contains many inaccuracies, it was decided a statement should be issued to the media to help set the record straight.

We were also pleased to see our views backed by several media outlets, including an insightful piece from journalist Steve Boggan, who took the time to interview many of the people involved in the project.

Here is our media statement, in full.

A University of Leicester spokesperson said:

“The University pledged the first major payment for the excavation, and underwrote the dig, which included covering the cost of expert academics’ time and the use of equipment, whereupon the City Council and others also joined in. Philippa Langley showed great tenacity and determination to also crowdsource funding from the Richard III Society to contribute to the fund required for the initial exploratory dig. The University paid for the majority of the excavation and the entirety of the post-excavation costs. The University has financial records to back this up.

We appreciate that while The Lost King is based on real events, it is a work of fiction, and recollections will vary from various people of what happened during such an incredibly exciting moment in history.

It is our view that the portrayal of the University of Leicester’s role in the project is far removed from the accurate work that took place.

We worked closely with Philippa Langley throughout the project, and she was not sidelined by the University. Indeed, she formed part of the team interview panel for every single press conference connected to the King.

The suggested whereabouts of the King’s remains was public knowledge prior to Philippa’s intervention, however, we recognise she was the positive driving force behind the decision to dig for Richard III.

The University made an offer to The Lost King production team, in good faith, to help it establish the correct factual basis of the project that discovered and identified Richard III. This offer was not taken up.

We also understand that the film’s production team took no steps to establish the factual basis with Richard Taylor, the University’s then-Deputy Registrar, who helped oversee and coordinate the project. We understand the portrayal of Richard Taylor in the film does not in any way resemble the reality during this period, whilst an employee of the University of Leicester. Our records point to a colleague engaging constructively, collegiately, fairly and professionally throughout the project.

Richard Taylor’s last date of employment at the University was 15 September 2013, and any portrayal of his involvement after this point with the project’s arrangements (for example the decisions regarding the re-interment) simply cannot be accurate.”

Find out more about how the University funded the project on our facts and figures page.