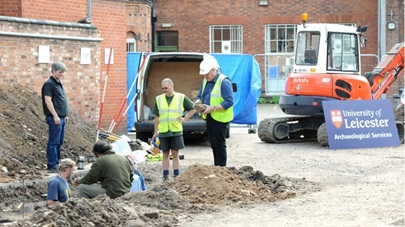 The University of Leicester was the main financial backer of the project. We pledged the first major payment for the excavation, and underwrote the dig, which included covering the cost of expert academics’ time and the use of equipment, whereupon the City Council and others also joined in.

Philippa Langley from the Richard III Society instigated the search for the King, and crowdsourced a sum to contribute to the fund required for the initial exploratory dig after another backer for the project pulled out.

The University paid for the majority of the excavation and the entirety of the post-excavation costs which allowed for the remains to be identified as those of Richard III. The University has financial records to back this up.

In 2012, the year of the initial excavations, the project was funded in the following way:

Some of the project partners incurred additional costs related to the dig. For example, the City Council and University held public open days to give access to the site. The associated costs of security for those events are not listed in these core costs.

There was a 50-50 female-male gender split in the main 18-strong University of Leicester project team.

Find out more about who was involved on our meet the team and acknowledgements pages.

The project didn’t just involve people from The University of Leicester, Leicester City Council and the Richard III Society. We had experts from around the globe all helping us to solve the mystery of the King, including the USA, Netherlands, New Zealand, Austria, France, Germany and Scotland. Plus, those a little closer to home, from Loughborough, York, London, Oxford and Cambridge.

Find out more on our acknowledgements page.